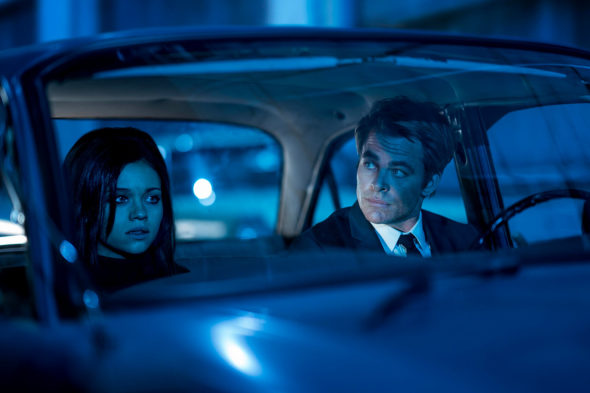 TV show description:
Inspired by the book, One Day She’ll Darken: The Mysterious Beginnings of Fauna Hodel (by Hodel), the I Am the Night TV show is a limited series which explores an adoptee’s connection to the murder of Elizabeth Short, i.e. the “Black Dahlia” slaying.

As an innocent teenaged girl growing up in the Reno, Nevada area, Fauna Hodel (Eisley) knew she had been given away at birth. She also knew there were secrets surrounding her early life, but was at ease with it, until she made a discovery that made her realize she had to question everything.

While digging into her origins, Fauna encounters Jay Singletary (Pine), a reporter who was ruined by a case that still haunts him. Together, Fauna and Jay follow the trail of evidence that seems to lead them right to Dr. George Hodel (Mays), a Los Angeles gynecologist.

A former child prodigy, Dr. Hodel grew into a brilliant physician, with a taste for Hollywood debauchery. Once he was connected to a big scandal though, his famous friends disappeared. Now Fauna and Jay need to figure out his connection to a notorious unsolved crime.

Series Finale:
Episode #6 — Queen’s Gambit, Accepted
When Fauna (India Eisley) hears what happened to Jimmy Lee (Golden Brooks), she frantically searches for a way home. As Watts explodes around her into chaotic riots, Fauna’s way out harbors a nightmarish trap. Jay (Chris Pine) stews in a cell that overflows with rioters, his options diminishing as the hours pass, until he hatches a desperate plan.
First aired: March 4, 2019.

What do you think? Do you like the I Am the Night TV series? Should this TNT TV show have been renewed for a second season?

I think this show should have a second season

For the First Time, I really have connected with a TV Show ” I am the Night”.
What I love the most it is the Art references, especially at the end of each episodes.
One of the most stunning ‘film Noir style’, and so intellectual.
The Best TV Series ever seen.
Please keep the show continuing!
Best Wishes.
A.

I am the night.
Yes second season