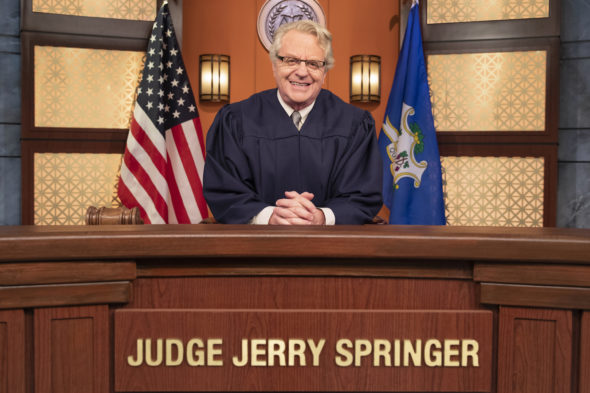 Court is adjourned for Jerry Springer. The Judge Jerry TV show has been cancelled and won’t be returning for a fourth season.

An arbitration-based reality show, Judge Jerry is presided over by Springer, the host of his own tabloid talk show for 27 seasons. Prior to becoming a television host in 1991, Springer had practiced law for many years. In the Judge Jerry series, cases are chosen from pending small claims court cases that have already been filed in jurisdictions across the United States. According to Springer, 30-35 cases were filmed a week, and in his off-weeks, he would study and research the cases so he could apply the law from the participants’ state.

Judge Jerry premiered in September 2019 as the highest-rated syndicated court show premiere in five years, according to its producer, NBCUniversal Syndication Studios. The series was renewed for a second season in February 2020 and renewed for a third year in March 2021. Viewership has dropped off over time which has led to the series being cancelled.

The syndicated series, which has amassed more than 350 episodes over the course of its three seasons, will remain on the air into September 2022.

What do you think? Have you been watching the Judge Jerry TV show on your local station? Are you disappointed that the syndicated series is ending?

It was nothing like his “other” show. I thought it was pretty entertaining.

I mean come on? Judge Judy is bad, but this? Please, for the sake of humanity, decency and dignity in the ashes of humanity, no more Jerry Springer on TV. Just the name makes me feel the need to have a bath.

Never saw this show. Did he have an episode about the mayor who paid a hooker with a personal check??