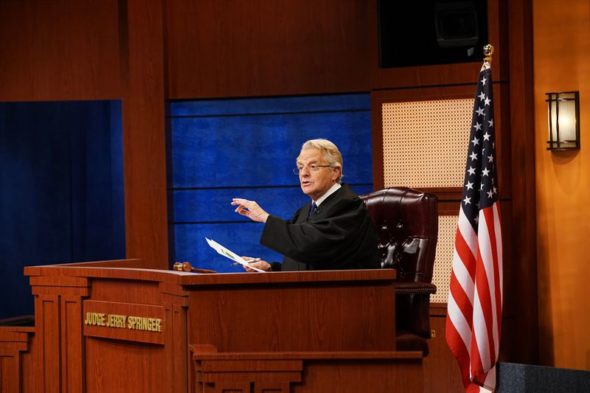 Jerry Springer is staying on the bench for at least one more season. His syndicated court series, Judge Jerry, has been renewed for a third season. In the weekday show, Springer listens to and decides on outrageous court cases.

NBC Universal revealed more about the renewal of Judge Jerry in a press release.

The honorable and iconic Judge Jerry Springer is turning up the heat for season three, presiding over a brand-new season of outrageous court cases that promises to be bigger, bolder, crazier and more fun than ever before! Simply put – this is not just another court show… this is Jerry Springer’s courtroom.

“I couldn’t be more excited for this new season where our audience gets an even closer look into the conflicts and drama of some very intense and outrageous disputes,” said Springer. “I’m totally aware of how fortunate I am to have such a rewarding job and I promise viewers and stations to do everything I can to dispense justice and fairness in a most entertaining way.”

“With his unique ability to relate to people from all walks of life, our guests trust Judge Jerry Springer to get to the truth and lay all their cards on the table in his courtroom – good and bad!” said Wilson. “We look forward to another season with the show’s extremely talented production team, our loyal audience, and continuing Judge Jerry’s success for years to come.”

“I am thrilled to be working with Jerry on season three,” said executive producer, Kerry Shannon. “We’re bringing story-driven cases and outrageous characters that our audience will love, to court this season.”

Judge Jerry utilizes all aspects of Springer’s talent for connecting with people. From his incredibly relatable and funny personality, to his law degree and experience as former Mayor of Cincinnati, Jerry Springer has a knack for getting people to confess their dirty laundry with juicy stories along the way. Judge Jerry is executive produced by Kerry Shannon.

Judge Jerry premiered in national broadcast syndication in the fall of 2019 as the highest rated syndicated court show premiere in 5 years. In its second season, Judge Jerry’s success continues by averaging over one million daily viewers while delivering one of the youngest audiences among its court show competitors.”

What do you think? Are you a fan of the Judge Jerry TV series? Do you watch the syndicated series weekdays?

I love Jerry Springer. It doesn’t matter to me if he is a judge or Hosting his show. He’s an American icon. Like Apple pie and Baseball, and Jerry Springer. I dread for the day he mo longer Hosts his show ( of any kind ) Have a great season and good luck.