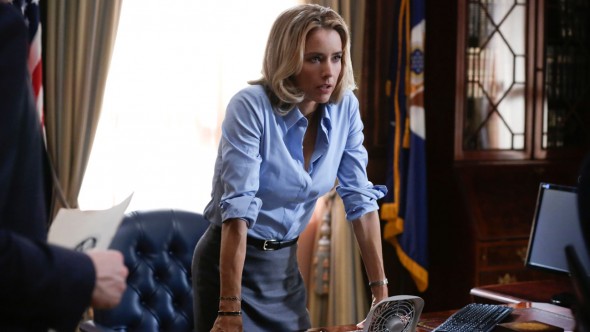 TV show description:
This dramatic series revolves around Elizabeth McCord (Tèa Leoni), a newly appointed Secretary of State. She’s a shrewd and determined woman who drives international diplomacy, battles office politics and circumvents protocol as she negotiates global and domestic issues — both at the White House and at home.

A college professor and a brilliant former CIA analyst who left the agency for ethical reasons, Elizabeth returns to public life at the request of the President — following the suspicious death of her predecessor.

President Conrad Dalton (Keith Carradine) values her apolitical leanings, her deep knowledge of the Middle East, and her flair for languages. He also appreciates her ability to not just think outside the box, but to not even acknowledge there is a box.

Series Finale:
Episode #120 — Leaving the Station
President Elizabeth McCord kicks off a new landmark political initiative with help from members of the World Cup Champion U.S. Women’s Soccer team, while Flo Avery (Cicely Tyson), who was born the day women were granted the right to vote, looks on. Opposing the initiative is Senator Amy Ross (Tyne Daley) from Ohio. Also, the McCords overcome last-minute obstacles to pull off a spectacular family celebration with a reunion of familiar faces, that includes a performance by Peter Frampton.
First aired: December 8, 2019.

What do you think? Do you like the Madam Secretary TV show? Do you think it should have ended or been renewed for a seventh season?

I am so excited for another season!!! I love that she is a strong, smart woman whom her husband is not ashamed of nor threatened by! I pretty much hate politics but this show has helped me learn, in a fun way, about our government and how the whole world works with and without each other; I’m not at the hate level of politics now, just a dislike, the show is helping me out with that. I also love the somewhat cleanliness of the show, no bad language, no trashy drama and I love that they show the life of… Read more »

I love Madam Secretary. Love the reality, acting & I notice the politics of it is fair, showing both sides of plots. BUT I WILL NOT WATCH THE OPENING OF THIS SEASON WITH THAT TRAITOR, Pathological liar & murderer Hillary Clinton ON. She is crooked, belongs in prison. Unless she is cancelled off. I as well as many others, 1/2 the country will sacrifice & not watch the show again.

love this show, just hoping that CBS does not cancel Madam Secretary.

I’ve watched the entire series on Netflix now and searched to find out if it was renewed. THANK GOD! It was. The last episodes had my family and me in tears. Thank you for having such a meaningful show with topics we can actually discuss on logic. It really makes us share ideas and brings awareness to real issues we tend to avoid. Not to mention characters that I’m proud to let my young daughters see as role models with brains. Thank you!!!!

You must renew this amazing show! I am sick of all of the ‘reality’ shows that seem to draw in a much younger crowd. This is a fantastic show, one of only a few available on T.V.

Madame Secretary is a fantastic show!
The story line and acting superb.
Since I work on the night the show is on, I binge watch it on Netflix. Thank you for bringing such an intelligent series and cast on TV. If I could I would watch it in TV to get the ratings up. I am grateful for the parallels you draw between the issues in the show and what is happening politically in this country. Thank you for the brilliance !

YES, YES, YES!!! PLEASE BRING THIS SHOW BACK FOR ANOTHER SEASON. I AM SO SICK OF OTHER SHOWS. MADAM SECRETARY, IS WAY ABOVE ALL THE TRASH THAT IS ON TV. BRING IT BACK, PLEASE!!!

When you moved Madame Secretary to 10PM Sundays, even later after sports coverage) I lost track of the series. So of late, I have been binge watching the series and currently in 4th season. Just saw BeBe Neuwirth leave and I am downcast. She brought empathy to the brusque State Dept…..I’m crushed….can’t imagine that her new venue will give her the latitude to show off her acting skills. Much can be done with the series because of our Trump era debacle and hope you take on the seriousness of our country’s current and present danger that faces our future…..no kidding!!!!… Read more »

I love Madam Secretary I really hope it continues….I am hoping it goes back to being on at 9:00 on Sunday night I always looked forward to this show

I watch this show every week despite its late night schedule – Sunday. I’d love to have this tv program continued. A bit political yet very entertaining. The cast does a great job!

Madame Secretary should definitely be renewed for another year. It is such a wonderful show and the dynamics of all the characters are wonderful. Tea and Tim are perfect together. Good pairing of actors

This is the best show ever!!! The Tea’ was the perfect pick for this show.. I hope it never ends. There are so many issues addressed in the show that it helps you better understand how things are handeled from our government while protecting its citizens at all cost.

I think Madame Secretary is the best show on TV. Intelligent and interesting dialogue and plots.

I sincerely hope that Madam Secretary will not be cancelled. It is one of the most intelligent and interesting TV shows ever to air. I am constantly amazed at how on point and timely the shows plots are. Don’t know how the writers do it so well. It gives some real insight into what must be the actual workings of the State Dept and world political interactions. Please keep up the good work and keep the show running. I don’t watch most current TV shows but never miss this one. Thank you CBS!

This is a must st-watch show!!!