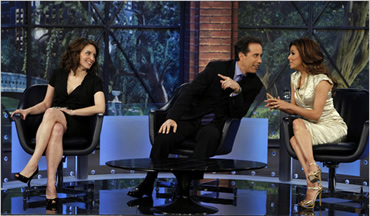 NBC’s three new winter season reality/game shows are a hit and have each been renewed for the 2010-11 season. Apparently the heavy promotion of The Marriage Ref, Minute to Win It, and Who Do You Think You Are? has paid off for the peacock network. Paul Telegdy, Executive Vice President, Alternative Programming, made the announcement, explaining, “All of these new series have demonstrated increasing popularity and generated far-reaching interest among viewers.”

Two of the series, The Marriage Ref and Who Do You Think You Are?, rely on celebrity involvement to help draw viewers in. The Marriage Ref is produced by Jerry Seinfeld and has featured panelists such as Kelly Ripa, Alec Baldwin, Sheryl Crow, Madonna, Ricky Gervais, and Tina Fey. Who Do You Think You Are? is produced by Friends-alum Lisa Kudrow, and each week features a different celebrity, so far including Sarah Jessica Parker, Matthew Broderick, Emmitt Smith, and Brooke Shields.

However, these series couldn’t serve more different purposes. In Who Do You Think You Are?, celebrities are researching their roots, looking for back into their family tree to confirm longheld family secrets, search for lost relatives, etc. In the process, they always dig up some unique information.

Conceived by comedian/actor Tom Papa and Seinfeld, The Marriage Ref, meanwhile, deals with family issues in the here and now. Papa serves as host, and a panel of three celebrities is featured. Clips are shown of a rather mundane fight between a married couple, such as keeping a motorcycle indoors, who’s going to cook dinner, and overly aggressive dogs that get away with near murder. After the clips are shown, the celebrity panel discusses the pros and cons of both sides and make suggestions of who to side with, leaving Papa to make the ultimate decision.

Guy Fieri of Diners, Drive-Ins and Dives, hosts Minute to Win It, which doesn’t feature celebrities at all, but is a pure game show. Contestants have to finish nine nerve-wracking tasks in under sixty seconds, and if they do so, they can win $1 million. With each increasing step, the contestants can either give up and keep the money earned, or choose to risk it all and keep going.

There’s no word on if the shows will be part of the fall or midseason schedules. A decision won’t likely be made until NBC settles on its new season schedule.

What do you think? Are you glad that all or any of these shows will be back next season? Do you like one better than the other?

i thought Marriage Ref was pretty funny. I didn’t care too much with the one with Kristie Alley though. It sometimes springboarded conversations about the issues ( as mundane as they were) with my husband as we would watch it together. I don’t know much about the other two shows – i didn’t watch them. I hope soon i will see Marriage Ref show up on my tv listings.

I really like Marriage Ref! It’s just funny to watch other “real” people and the odd qwerks and arguments they are brave enough to share on national t.v. The celebs are sometimes hit or miss. I’d prefer two permanent celebs, one rotating spot. Hope they bring it back, I really could use a laugh.

I was just getting into Ancestry.com myself to trace my family when “Who Do You Think You Are” came on. I was extremely fascinated and interested in the past and thoroughly enjoyed this new show. I can’t wait for the next season – please start airing it now. I truly love it and want more and more. Good Job Lisa Kudrow!

glad the marriage ref and who do you think you are? got renewed

i dont care what the celebs say on the marriage…..i just watch it cuz the fights usually crack me up lol

My husband and I don’t watch much TV at all anymore, really nothing good on anymore. But we LOVED the Marriage Ref, found it refreshingly clean, for the most part, and respectful of marriage with the exception of one episode. The host was hilarious, and the best episodes had Jerry Seinfeld on the panel. Thanks NBC for renewing something we will watch!

The Marriage Ref is a terrible show. I DVR’d it to watch with my family. We all sat there, staring at each other and waiting for the laughs. I saw pieces of the Kirstie Alley episode and it has been voted, by far, the funniest episode. Who doesn’t love Kirstie? Min Win is OK. I can watch it live but don’t bother DVR’ing it. Who…Are is facinating to me, as I watched Mr Sarah Jessica Parker (what a wuss this clown is) go back to his Civil War roots. I haven’t watched other episodes. For a decade, NBC has needed… Read more »

What do they win on The Marriage Rep? What could you win, except possibly counseling?

They should renew CHUCK rather than forcing these shows.NBC is pathetic sometimes

WTF?!?!? Marriage Ref SUCKS SO BAD!!! This PROVES that Jerry Sienfeld has blackmail material on some suit at NBC! OR the more likely scenario is that NBC hates The Marriage Ref as much as EVERYONE else does, but has yet to find a replacement show. I suspect the SECOND a replacement show is created, this weak, dull and horribly executed show will be CANCELLED!! (And WOW does TRUMP suck!!!)

I love the original British version of Who Do You Think You Are, but something about the NBC version is just soulless.

Get rid of them. They keep this garbage and lose shows like “The Forgotten” and “Trauma”. Network TV has really gotten bad as of late.

If they get rid of anything, it should be “The Marriage Ref” because that show is one of the worst ever. After such huge success from “Seinfeld”, is that the best Jerry could do?

Good about the “marriage ref” and “minute to win it”, 2 concepts that surprisely haven’t been brought to tv until now. Not a fan of “who do you think your” though.

YUCKO!!!!! What is it with people? Are your lives THAT boring that you have to watch others be idiots????? WHO cares how celebrities live??? They put their pants on one leg at a time just like the rest of us and most of us have more interesting relatives than they do!!! Mine flew the first mail route in the US, founded a college and generaled the Confederacy! I imagine some of yours did similar things! Turn the TV off and learn about them! Teach your kids about them. Kids spend an average of 46 HOURS a week with media…how about… Read more »