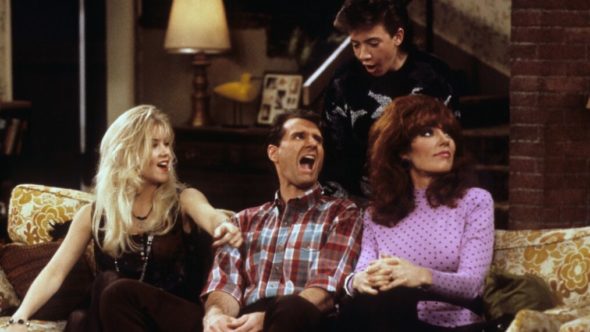 Married… with Children may get revived with a new animated version of the popular 1987-97 FOX sitcom. Katey Sagal, Ed O’Neill, Christina Applegate, and David Faustino are set to reprise their roles as the Bundy clan should the series move forward.

Deadline revealed the following about the revival:

“The new take on the 1987 Fox sitcom is written by Family Guy executive producer Alex Carter, who serves as showrunner. Sony Pictures Television, which owns and distributes the original series, has been working on the animated project for over a year and closed deals with the quartet of Married… with Children stars before taking it out.”

No network is attached to the series yet, but it would likely land on FOX, Hulu, or Peacock. The series is still in the development stages.

What do you think? Did you watch the original Married… with Children TV series on FOX? Would you watch an animated series if it is ordered?

Renew it, that’s a great idea

$5 will get you $10 there won’t be any fat women jokes or Psycho Dad songs.

Bring back the Bundys?? Sure, why the Hell not?

I’d even prefer a show with TED Bundy over any more ridiculous “reality” shows.

Seriously, if it comes down to that, I’ll send him back up there.

I love Married With Children and the cast and writing is why I do but again, this revival / reboot trend is just ridiculous. I’d rather them do like a couple episodes of this in animated form then a whole new show. Or to commemorate the 35th anniversary of the show, have a live action reunion instead.

*than a whole new show, not then

Why cartoon too many shows over the decades since The Simpsons into trending nowadays tired of this repeat come up something else so funny .