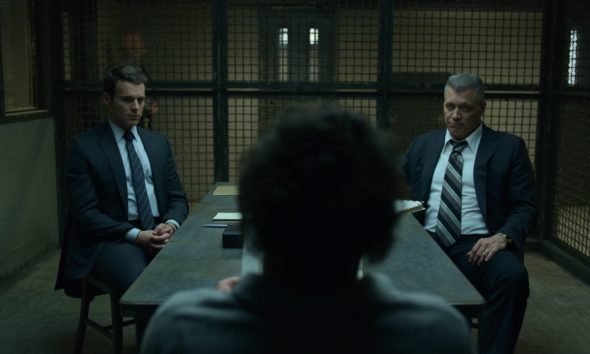 What is next for FBI agents Holden Ford and Bill Tench? Is the Mindhunter TV show cancelled or renewed for a third season on Netflix? The television vulture is watching all the latest TV cancellation and renewal news, so this page is the place to track the status of Mindhunter, season three. Bookmark it, or subscribe for the latest updates. Remember, the television vulture is watching your shows. Are you?

Unless Netflix decides to publicize its viewership, it is hard to predict if they’ll cancel or renew Mindhunter for season three. These days, if they’re going to renew, they usually do so within a month of the season premiere and announced it within two month. Netflix has been quicker to cancel of late, but flying blind, I think this show will get a renewal. Since that’s just speculation, I will keep an eye out for developments and update this page with breaking developments. Subscribe for free updates on any Mindhunters cancellation or renewal news.

1/17/20 update: The cast contracts have expired and the future of Mindhunter has been put on indefinite hold.

What do you think? Should the Mindhunter TV show have been renewed for a third season?

Netflix has a really bad habit of doing this with great shows! Santa Clarita Diet and Bloodlines.

Anyway there are a lot of reasons this deserves more seasons! But you can’t cut a show ending it with a messed up man probably heading down a darker path.!

You end a series that way! One comes home to his wife and kid not just gone, but packed up and gone! Ridiculous decision Netflix!