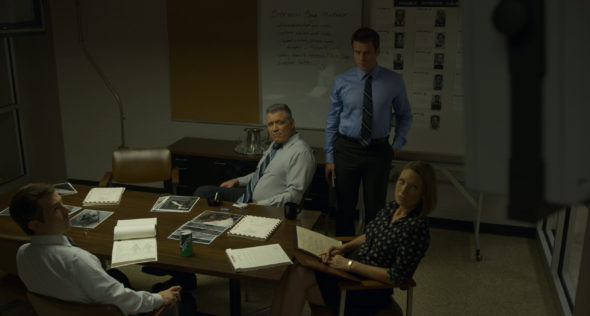 Mindhunter fans have some bad news coming their way. There is unlikely to be a third season of the David Fincher series. Netflix has put the series on indefinite hold and the contracts for the cast have also expired. While this may not be a cancellation, the result is the same. Viewers won’t be seeing a third season, at least in the near future.

This news comes five months after the premiere of the second season of Mindhunter on the streaming service.

A Netflix spokesperson said the following about the future of the series, per a Deadline report:

“David is focused on directing his first Netflix film Mank and on producing the second season of Love, Death and Robots. He may revisit Mindhunter again in the future, but in the meantime felt it wasn’t fair to the actors to hold them from seeking other work while he was exploring new work of his own.”

The cast of Mindhunter includes Jonathan Groff, Holt McCallany, and Anna Torv. Netflix does not release viewing numbers, but season two of the series earned a 9.60 average in this site’s viewer voting poll.

What do you think? Are you a fan of Mindhunter? Did you want the show back for a third season?

To whom this may concern, please don’t cancel the show Mindhunter. In my opinion its the best historical crime drama yet.

Yes, please! One of the best I’ve seen in this genre!

So sad to see there won’t be another season of Mindhunter. This was one quickly became my favorite. I think Mr. Fincher is making a huge mistake. The true crime audience is bigger than ever. Besides, there hasn’t been a more realistic portrayal of a criminal than Cameron Britton as Ed Kemper. He should have won an Emmy for that performance!