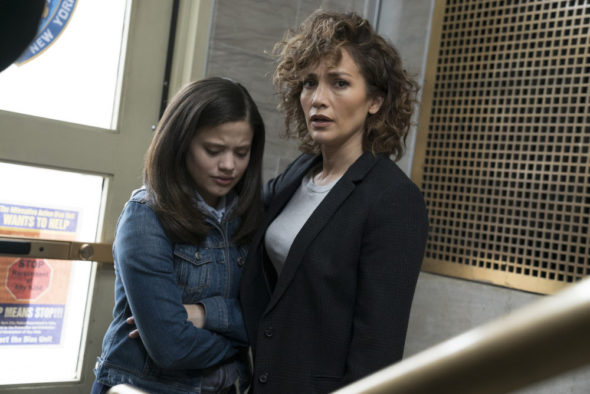 The Shades of Blue TV show has been cancelled by NBC, but there is some good news. The network has announced the third and final season of Shades of Blue premieres on NBC, Sunday, June 17, 2018 at 10:00pm ET/PT.

Riveting Series Will Conclude Following Its Third and Final Season

The critically acclaimed drama will conclude after three seasons as the storyline brings Lopez’s complex character to a fitting resolution. Her NBC relationship continues in June with the return of the second season of the explosive hit competition series “World of Dance” amid a busy slate of film and television projects and her residency in Las Vegas.

“I have enjoyed producing and starring in this beautifully complicated world and playing such an empowering yet flawed character – a women, a detective, but, first and foremost, a mother,” Lopez said. “Now looking at it with a little distance, playing Harlee strengthened me and helped me grow into a more self-assured woman. It’s crazy how some parts permeate your soul and change you forever and for that I am grateful. We crafted a poetic three-season arc on how her journey ends, which is true redemption. The way only Harlee could have done it – the hard way, the road less traveled. I thank NBC and all the talented actors, writers, crew and producers for going on this journey with us!”

“We are very proud that this remarkable series attracted iconic stars like the incomparable Jennifer Lopez and Ray Liotta to broadcast television,” said Lisa Katz, Co-President, Scripted Programming, NBC Entertainment. “We are so grateful for all the hard work and dedication of Jack Orman and his incredible producers as well as the entire cast and crew.”

Added Pearlena Igbokwe, President, Universal Television: “This is one of our flagship shows and we’re excited to share the final chapter with viewers who will be on the edge of their seats discovering how Harlee’s story concludes. It has been a supreme pleasure to work with executive producers Jennifer Lopez, Jack Orman, Elaine Goldsmith-Thomas, Benny Medina, Ryan Seacrest and Nina Wass.”

What do you think? Are you a fan of the Shades of Blue TV series? Is it ending at the right time? If it were up to you, would NBC cancel or renew Shades of Blue for season four? Sound off, in the comments.

Please don’t cancel this show — I love it!

I too Love this show, and can’t believe it is being cancelled. The story lines are great and leave you wanting more. If the ratings were holding their own, why cancel? The networks are now looking into all of these reboots instead of new ideas. Great show, hate to see it go after just 3 seasons!

I hate when the networks cancel excellent shows… I love this show and the whole cast!!! WHY?? It’s a good show it’s always the good ones that get cancelled. I don’t understand!?

Why do they always pick the best shows to cancel? I’m guessing Jennifer Lopez has too many pans in the fire & chose her dance show over this one. I love this show & have been waiting for it to return. Now it’s bitter sweet. The actors are great as are the storylines. I was really hoping it would last at least 5 or 6 seasons. Such a disappointment!

BUMMER! The only thing that makes it a little okay is that you mention a closure. but still a BUMMER!

Please say it isn’t so. We love Shades of Blue! Please we beg you to keep it going don’t cancel it. We await anxiously each time it goes off for it to come back on. Love the storyline and all the characters. You can’t do this to us.

PLEASE don’t cancel! One of the best shows on NBC

A good story line and characters. Why take it off and leave some of these other shows on?

We would be happy if “Shades of Blue” continued past the upcoming Season 3. The entire cast is believable, and the situations they manage to get into are beyond a law-abiding citizen’s imagination. This show has been totally enjoyable and we look forward to Season 3 and the finale. By the way, we’re ages 72 and 84 – way past the demographics shown for ratings. Thanks for a great program!

I have all along questioned the age demographics that is the basis for ratings.

The ratings were absolute CRAP, but why should ratings matter anymore?

It doesn’t matter why ratings are important. They are, period. That’s just the way it is and as long as they matter, the numbers will continue to dictate renewals and cancellations. People can complain about it all they want, but that won’t change anything unless the advertising business finds a more effective way of getting people to watch their commercials.

According to the article, the ratings of “Shades of Blue” were excellent: “Last season “Shades of Blue” won the slot among ABC, CBS and NBC in every key demographic – adults, men and women 18-34, 18-49 and 25-54.” So I don’t understand your comment.