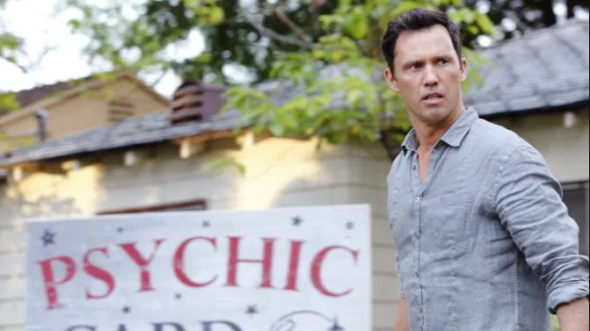 “I need you to fix him.” Today, Hulu released the official trailer for season two of Shut Eye.

The drama stars Jeffrey Donovan as Charlie Haverford, “a scammer with a small chain of fortune-telling storefronts and contracts building tricks for a family that controls the business in the greater chunk of Los Angeles.” The cast also includes Isabella Rossellini, KaDee Strickland, and Angus Sampson.

Synopsis: Charlie Haverford (Jeffrey Donovan) promised Linda (KaDee Strickland) a home when they first met – a luxury they have yet to truly relax into all these years later, given their never-ending chase of the next con. Now, more than ever, Charlie and Linda need to completely trust one another, but that’s never been easy for these two unrelenting con-artists. As Linda struggles with Gina’s (Emmanuelle Chriqui) death, her concern over Charlie’s sanity, and the thinning thread of faith she has for her husband’s “plan” to save their lives and livelihood, Charlie plots to get out from under Fonso (Angus Sampson), Rita (Isabella Rossellini) and Eduardo’s (David Zayas) thumbs. Meanwhile, he continues to attempt to make sense of his visions and to further his quest to finally realize a “home” for his family. The Marks family faces similar uncertainty as their home has quite literally been taken from them. Fonso and Rita are left at odds following the dramatic events surrounding Drina (Havana Guppy) and Lil’ Tony’s wedding. Rita, a staunch defender of tradition, quickly learns that her future depends on deftly navigating her obligations to her family and her culture. Her life is further complicated by a federal investigation that threatens everything she holds dear. Fonso, now cast out from his family and community, must reinvent himself and figure out where this new incarnation belongs. Even in Los Angeles – a city caught between bullshit and enlightenment – there is no place like home.”

What do you think? Have you seen the first season of Shut Eye? Will you watch season two?