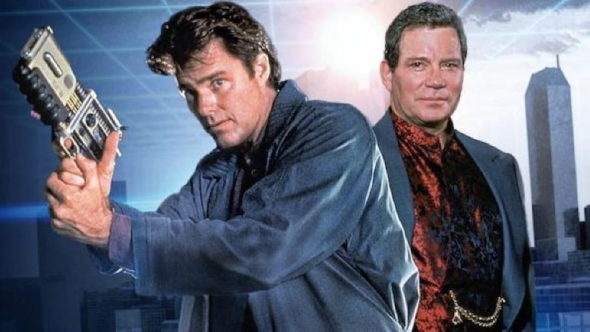 A new TekWar series is in the works. The futuristic detective novel series is being developed into an adult animated series. The books were created by William Shatner and ghost-written by Ron Goulart.

This will be the second time the books have been made into a series for the small screen. A live-action TekWar aired on USA Network and Sci Fi Channel for two seasons between 1994 – 1996. Greg Evigan starred in that series with Eugene Clark Catherine Blythe, Torri Higginson, Natalie Radford, Maria del Mar, and Shatner.

The new series is being described as follows, per Deadline:

“TekWar is being conceptualized as a mixed-reality animated series where viewers will be able to participate with the show in different forms of technology via mobile, tablets or wearable devices. The series can be viewed stand-alone, but the level of immersion into the show, its characters and technology is enhanced by the ability to become part of the narrative.”

“We are very excited to work with the legendary William Shatner to reimagine the world of TekWar at a post-pandemic time. TekWar was truly ahead of its time envisioning a future filled with AI and the world of simulated reality. It’s becoming our reality now, and we’re excited to build a storyverse around it.”

“We want to do something that hasn’t been done before. Who better to do that with than one of the greatest legends in the sci-fi universe? The world and story of TekWar transcends traditional linear media and has the potential to be experienced on multiple entertainment platforms, some that exist today and some we’ll have to invent, and we can’t wait to get started.”

What do you think? Do you want to see TekWar back on the small screen?