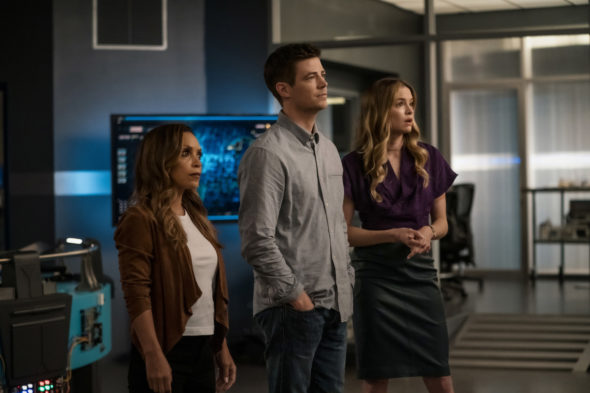 Will Barry and his team run out of gas in the eighth season of the The Flash TV show on The CW? As we all know, the Nielsen ratings typically play a big role in determining whether a TV show like The Flash is cancelled or renewed for season nine. Unfortunately, most of us do not live in Nielsen households. Because many viewers feel frustrated when their viewing habits and opinions aren’t considered, we invite you to rate all of the eighth season episodes of The Flash here. *Status Update Below.

A CW superhero series, The Flash stars Grant Gustin, Candice Patton, Danielle Panabaker, Danielle Nicolet, Kayla Compton, Brandon McKnight, and Jesse L. Martin. The action-adventure series centers on police scientist Barry Allen (Gustin) who develops super speed after a dark-matter lightning strike. Behind a mask, Barry uses his powers to protect the people of Central City from many an evil force as The Flash. Those on his team include Caitlin Snow/Frost (Panabaker), Meta-Empath Cecile Horton (Nicolet), the light-powered meta Allegra Garcia (Compton), brilliant tech-nerd Chester P. Runk (McKnight), and retired detective Joe West (Martin). Season eight picks up with Barry and his wife, Iris West-Allen (Patton), at the top of their game — both in their careers as superhero and reporter and as a devoted couple. But when the powerful alien Despero unleashes near annihilation on Central City, The Flash and his team must once again defy impossible odds to save the day. But their victory is short-lived as two new threats rise from the ashes of “Armageddon,” one of which will unleash unforeseen horrors into the lives of Barry and his teammates — and change Team Flash forever.

What do you think? Which season eight episodes of The Flash TV series do you rate as wonderful, terrible, or somewhere between? Do you think that The Flash should be cancelled or renewed for a ninth season on The CW? Don’t forget to vote, and share your thoughts, below.

I love the show, season 7 was the best