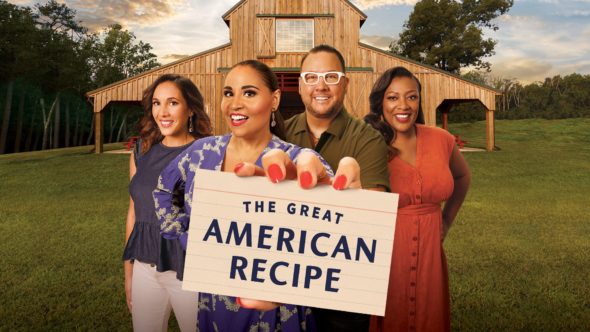 The Great American Recipe is returning for a second season. PBS has renewed the cooking competition series for eight episodes, with Alejandra Ramos returning as host and chefs Leah Cohen, Tiffany Derry, and Graham Elliot returning as judges and mentors. The series, which celebrates multiculturalism, returns on June 19th.

PBS revealed more about the renewal in a press release.

Today at the Television Critics Association Winter Press Tour, PBS announced that Season 2 of the popular series THE GREAT AMERICAN RECIPE premieres Mondays, June 19-August 7, 9:00-10:00 p.m. ET (check local listings) on PBS, PBS.org and the PBS app. A fun and uplifting eight-part cooking competition that celebrates the multiculturalism that makes American food unique and iconic, Season 2 will introduce viewers to a new group of inventive home cooks who compete to wow the judges with their beloved signature dishes. Alejandra Ramos returns as host and renowned chefs Leah Cohen, Tiffany Derry and Graham Elliot are back as judges and mentors for Season 2.

“The first season of THE GREAT AMERICAN RECIPE was a multiplatform success, attracting younger and more diverse audiences to PBS,” said Zara Frankel, Senior Director of Programming and Development, General Audience Programming at PBS. “Viewers rooted for and connected with our wonderful home cooks from around the country, and we are delighted to launch a new season of this fan favorite with fresh faces, new recipes and heartwarming stories.”

“We couldn’t be more excited to launch the second season of THE GREAT AMERICAN RECIPE in June,” said Steve Humble, Chief Content Officer at VPM, co-producer of the series. “The team and cast had another great experience filming the show right here in Virginia. Being able to share the participants’ touching personal stories through food is something we can all relate to. We found another batch of amazing home cooks from around the country, and we can’t wait to share another amazing array of dishes and family recipes with our audience.”

“We are excited to be partnering again with PBS and VPM for this celebration of everything that makes American cuisine so distinctive and diverse.” said Jilly Pearce, President, Objective Media Group America. “In Season 1, we experienced the culinary legacies of home cooks from the Midwest to Mexico. This season, our cooks traveled from all over the country to share their stories and most treasured recipes, from Native American bison short ribs, to Hawaiian loco moco, to Guyanese chicken curry.”

THE GREAT AMERICAN RECIPE blends food, family and fun, highlighting the amazing variety of tastes and traditions from across the U.S. while capturing the roots of America’s diverse cuisine. From family favorites passed down through generations to internationally influenced recipes that are becoming mainstays of American cuisine, the series mixes camaraderie with competition, revealing rich personal stories and the inspiration behind the contestants’ favorite recipes. As with the first season, one of the winner’s dishes will grace the cover of The Great American Recipe Cookbook Season 2, an official series cookbook, which will feature recipes from the contestants, the host and the judges.

What do you think? Are you a fan of this cooking competition series? Do you plan to watch season two of  The Great American Recipe?