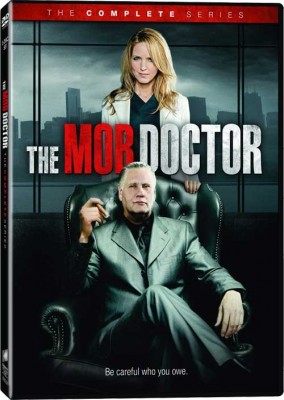 FOX cancelled Chicago Code awhile back and it was outstanding. Now here we go again. Do you remember when NBC almost cancelled The Office? And then what happened? Give shows a chance will ya? Does everything on television have to be a fake reality show?

I really loved the show. Watch it DVR’d it and watched it again. I can’t believe that FOX is cancelling this show.

FOX really needs to get someone in their programming department that has a brain and a sense of what the public wants to see. This was a great series that developed slowly but with good timing. The characters were well developed also. Fox sucks.

THIS SUCKS…..Mob Doc rocked ! does fox know the meaning of UNIQUE ? this was a fresh take on the mob. one of my fav new shows…..this explains why FOX has gone down so much in ratings….cancelling Mob Doc, Tera Nova and making Bones a total JOKE. guess they dont care because they will win soon with american idol…but even that has lost its shine. MOB BOSS WILL BE MISSED !

This is my favorite show. My entire family watches this show, and they are all the type of people businesses would like to target. I do not get it. The story line was never boring, the actors were fabulous, it was exciting. Please, someone, pick up the option to this show!

why on earth would you cancel a show like this. It’s exciting – please bring it back. There is NOT MUCH on TV these days to watch – brutal!

FOX blows.. Mob Doctor was a great show. Ok I am bias cuz there was a LOT of if filmed in my neighborhood and it was way cool to watch it after seeing it be filmed.. There are a LOT worse shows out there.. WHY does fox do this all the time? Everything that is half way decent they cancel.. IM DONE with em.. I wont watch anything on Fox anymore.

FOX cancelled Terra Nova and it was an awesome show as well, I think I am just going to quit watching ALL the FOX seires so I am not disappointed!!!!!

we are going to miss the mob dr. not many good shows on tv anymore.but mob dr. was a great show. why is it being cancelled? so many people watched it…..

Would another network take it on?

Please change your mind FOX I love this show !!!

This is soooo sad! I am totally shocked to hear that you thought it was the worst when I thought that it was outstanding and the cast extraordinary!

You are cancelling The Mob Doctor? Um well ok. Hard to have a favorite or follow a series anymore. CLUE: dumbshits under 25 don”t watch tv! Cater to an audience and age range that does.

My husband & I are beyond sad to hear that the Mob Doctor is being cancelled. What can we do to bring it back? It was such an entertaining story. PLEASE RE-CONSIDER!!!

I have to agree. It seems just when I find a show I really like, it’s cancelled! I hope FOX reconsiders. If not, maybe another network will.

Why ? Why? Why did it get cancelled the story line could have continued it could have been great and still can be please reconsider………………………..