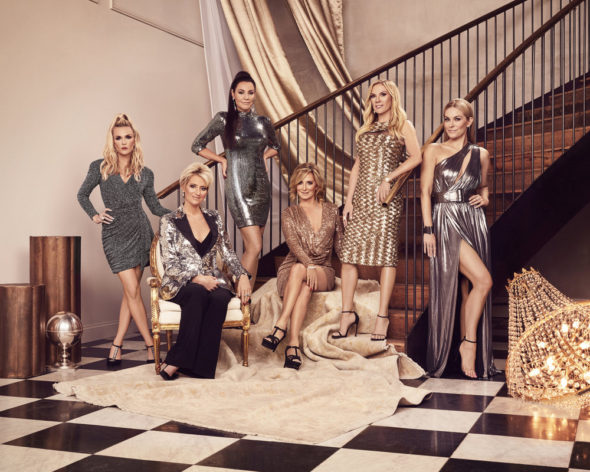 Life is still a cabaret, but now it’s called “Marry, F**k, Marry” as Luann de Lesseps workshops the latest iteration of her notorious stage show. With her probation over, she tries to reclaim her old life, but realizes old habits die hard.

Ramona Singer is on the hunt for love and companionship, now all she needs is a man who fills out her checklist. She sold the beloved apartment she shared with daughter Avery and is now trying to get used to her new digs. Struggling with letting go of her old life, she seeks a little help in the form of therapy.

Sonja Morgan is living her best life! When she shows her latest Sonja by Sonja Morgan collection at NYFW, she is approached by an iconic NY department store with a big partnership offer. Looking for a fresh start, she faces one of the hardest decisions she has ever had to make.

Dorinda Medley is juggling moving into a new apartment, renovating the old one, and dealing with the damage caused by a flood at Bluestone Manor. As she re-evaluates her relationship with longtime boyfriend John, she’s rediscovering herself and trying to be at peace. But she continues to butt heads with Tinsley. When Ramona and Sonja try to step in to help her deal with what they perceive to be anger issues, tensions reach an all-time high.

Tinsley Mortimer is enjoying her life in the city with her newly adopted dogs and a new apartment at the hotel. But just when Tinsley is about to give up on love, an old flame returns and makes her an offer she can’t resist.

New housewife Leah McSweeney is a born-and-bred New Yorker. She is the mother of 12-year-old Keir and is also a boss who just celebrated the 15th anniversary of her streetwear brand for women, by women, Married to the Mob. Although she is the youngest in the group of women, she is not afraid to speak her mind, which at times causes friction, especially with Ramona and Sonja.

Leah McSweeney is a streetwear pioneer, female entrepreneur, cultural provocateur, and mother of 12-year-old Kier (aka Kiki), living in New York City. Leah famously launched Married to the Mob in 2004, one of the first streetwear brands for women, by women. She created her brand as a response to the male dominated streetwear scene of the time, proving women could be innovators, designers, and consumers in the space. Since launching, she has brokered exclusive partnerships with MCM, Kangol, Barbie, Colette Paris, Reebok, and Nike.

When she is not building her empire, Leah brings her strong female voice and viewpoint to her podcast Improper Etiquette. She is a contributor to Penthouse Magazine, Hypebae and Mass Appeal. Leah continues to advocate for female empowerment, street culture and creative entrepreneurship, she also leans into lifestyle topics like health, fitness and breaking the stigma around mental health. With the help of Tinsley Mortimer, Leah has found a new group of friends, but her outspoken nature proves to be too much for the ladies to handle at times.

What do you think? Are you a fan of this reality series? Are you excited to see someone new join the cast?

Maybe you should change the name to the desperate housewives of New York. It’s kind of a **** show.