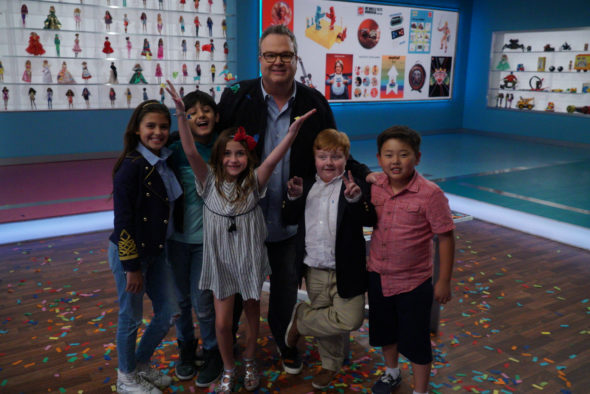 Where have all the good times gone? Has The Toy Box TV show been cancelled or renewed for a third season on ABC? The television vulture is watching all the latest cancellation and renewal news, so this page is the place to track the status of The Toy Box season three. Bookmark it, or subscribe for the latest updates. Remember, the television vulture is watching your shows. Are you?

In the second season, there will be a rotating panel of five kid-judges per episode. The winner from each week will move on to the finale. The grand prize winner’s toy will be made by Mattel; sold exclusively at Toys “R” Us stores nationwide and on Toysrus.com, where it joins last season’s winner, ArtSplash; and will receive a cash prize of $100,000.

The second season of The Toy Box averaged a 0.42 rating in the 18-49 demographic and 2.31 million viewers. Compared to season one, that’s down by 33% and 20%, respectively. Find out how The Toy Box stacks up against other ABC TV shows.

Last season, my cynical, starving gut told me that with the Mattel and Toys “R” Us tie-ins, this sly product placement program could survive. As the ratings plummeted (and my appetite soared) though, that seemed less likely. In the second season, the numbers have dropped very low so I expect The Toy Box to be cancelled this time around. I’ll keep an eye on the Nielsens and will update this page with breaking developments. Subscribe for free updates on any cancellation or renewal news about The Toy Box.

3/15/2018 update: Although The Toy Box has not been cancelled or renewed for season three, news has broken that Toys “R” Us is closing its doors. Here’s more on how that affects this TV show’s cancellation and renewal chances (not to mention my dinner plans).


What do you think? Do you hope the The Toy Box TV show will be renewed for a third season? How would you feel if ABC cancelled this TV series, instead?

This show, in my opinion was terrible, and everything wrong with today’s TV. Great concept bogged down by scripted lines from the kids (even intelligent kids don’t speak like this), and the usual reality TV tanke out of content edits. The kid contestants come off as condescending brats (I’m sure they’re not in real life). I would not be surprised if that’s what the producers were intentionally aiming for…to give it an edge and keep viewer attention. The only good part was the preliminary adults judges from the toy industry who would first look over the toys. Once it goes… Read more »

I love the show toy box keep it on