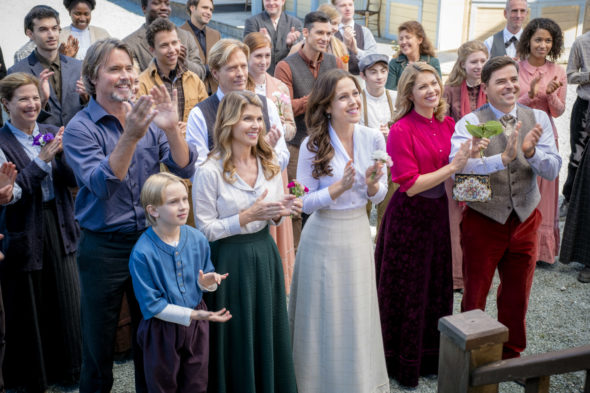 What’s in store for the new season of When Calls the Heart? Deadline reports Chris McNally and Kevin McGarry have joined the Hallmark TV show’s sixth season.

On When Calls the Heart, Chris McNally will be playing “Lucas Bouchard, a charming gambler and saloon owner who is hiding more than a card up his sleeve” while Kevin McGarry has been cast as “Nathan Grant, the epitome of the strong, silent type and takes all his responsibilities to heart as the new Mountie in town.”

Take a sneak peek at the Hallmark Channel series’ upcoming Christmas special below:

Spectacular series. Should be renewed forever!

I have been really depressed this entire year over a show that I adored before. PLEASE bring Jack back in cameo roles, i.e. appear in Elizabeth’s dreams, to encourage & guide her etc. Also, maybe the wrong guy died & it wasn’t Jack. Jack’s been laid up somewhere with amnesia. I’ve never had a TV character’s death depress me so & I’m 70yo! I also have not been able to watch the last season like I always did the others. I know that Daniel Lissing has no idea how he has affected people with his decision to leave the show… Read more »

I am still upset that Daniel Lissing left the show. I just dont understand why he couldnt continue doing WCTH bc it didnt take that much time out of his year. The series is not long enough for me. We need MORE shows like this on TV.

I am so sad Jack died!! I can’t believe it. I think he shouldn’t have died…he was one of the main characters.

I am thrilled there will be a new season. However, no greater love story exists like Jack and Elizabeth. I will miss Jack. I truly bawled when he was killed. You would have thought someone I actually knew had died. I’m not a crier!

I’m very excited about the new season of When Calls the Heart. I’ll be glad when it starts

I still miss Cedar Cove and other shows that were cancelled with cliffhangers. I shall not watch this show until an entire season has been shown and renewed

No, I won’t be watching the show anymore.

Yay for another season!
Life as we know it. People come and people go. Life continues, it does not stop when a love one dies.
Thank you for the hard work to make this a great series.

Will surely miss Jack, but will continue to watch this great show. Love the cast and setting. Thank You

I have read the book series… Even go I knew Jack was supposed to die… it was heartbreaking. It is the nature of drama. I will continue to watch…I live Erin and the rest of the cast. I just hope to see more of Daniel Lissing in other Hallmark productions. I will ALWAYS be a Heartie!

I have not read all the books. Jack died in the original books?

Not really looking forward to new season since Jack is dead. I haven’t even watched the DVDs I have from previous seasons. Sad

We are with you….us either! We will not be watching any more! Really left a sour taste in our mouths! Good bye when calls the heart!!

Just because jack died in book doesn’t mean they can’t bring him back it is a tv show after all not a book.

You can make it just as good as when Jack was there..it will be different for awhile but can be done.

Already took this off my queue. Hallmark disrespected its viewers big time since they knew Daniel was leaving a full 18 months prior. I will never forget or forgive.

It is sad they set us up really…..

No. When Calls the Heart died when Jack died.