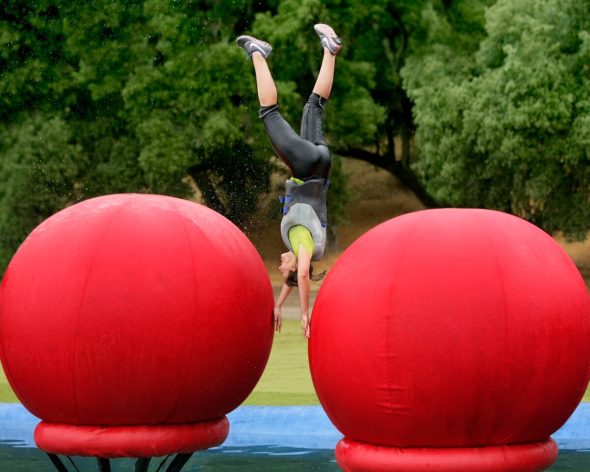 Wipeout is coming soon to TBS. The premiere date for the remake series has now been set, and viewers will be able to kick off April with the premiere of the wacky competition series, which is now being hosted by John Cena and Nicole Byer.

TBS revealed more about the Wipeout remake in a press release.

“Wipeout is the show that quarantine has been begging for…it has something for everyone in the family,” said Corie Henson, EVP/Head of Unscripted Development, TNT, TBS, truTV. “John and Nicole are the best pairing of 2021 and together with Camille, they bring the perfect balance of wit and cheerleading. We’ve created an edgier version of the original that fuses extreme athleticism with laugh-out-loud moments that fans of the show will be talking about long after the episode airs.”

Following its debut as the #1 new series of the summer in 2008, Wipeout amassed an impressive following throughout its seven seasons on-air. The series has been formatted globally in 30+ territories including Argentina, Australia and the UK, and has inspired numerous spin-offs and specials.

The new season of Wipeout will feature new format twists and elements that will push the athleticism and willpower of each contestant pairing to even greater extremes, all while delivering more than a few epic fails. Each game has been designed into three rounds and now features a jaw-dropping, three-stage, obstacle course consisting of multiple strategy and decision points designed to test the stamina of the competitors. The series’ iconic big balls also make a return, bringing many laughs and surprises along the way for fans.”

Check out a preview for the new Wipeout below.

What do you think? Did you watch the original Wipeout on ABC? Do you plan to watch the new Wipeout TV show on TBS?

Just finished watching a new “Wipeout” episode, I wasn’t even into the show. Firstly the new announcers are horrible, have no humor, unlike John A. and John H. have lots of it, so much you cant get enough of it. Secondly the course doesn’t look as interesting as the old one. Lastly now the prize is $25,000, why? So Basically every change they’ve made was bad.

The new wipeout is filled with bleeps because of all the swearing. The hosts are dry no sense of humor. The replaced Jill Wagner isn’t great either but is 100% better than Vanessa Lachay who wanted the camera in her constantly. I won’t be watching. It’s horrible.

Do not like new wipe out. The new commentators are horrible they talk more than the 2 guy’s did on the old wipe out it just different.may could have been better if it was 2 guy’s with more enthusiasm .

Just from the commercials, these commentators are HORRIBLE. Why wouldn’t the two Johns come back. Wont be watching.

Good grief no not this guy! The show won’t last

Didn’t a contestant just die while filming this show?

Yes but due to a health condition that ultimately killed him

I think the rach host should have to complete the course, to be thr host! I think that would draw a much much larger crowd!

I’m not sure what a “rach host” is, but I sure would like to see Nicole Byer do the course. That would be hilarious.