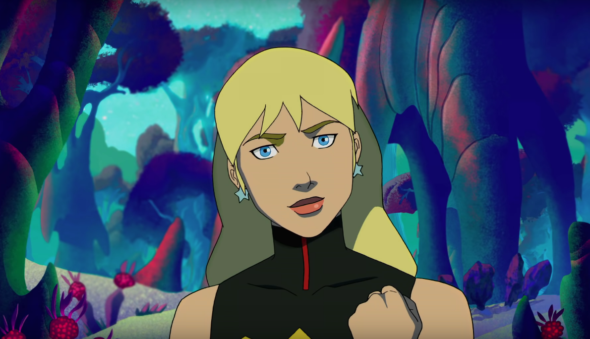 Young Justice fans were in for a special treat over the weekend. The title of the upcoming fourth season of the DC Universe season was revealed at DC Fan Dome on Saturday. The new season is titled Young Justice: Phantoms. Jason Spisak, Khary Payton, Stephanie Lemelin, Nolan North, Denise Boutte, Danica McKellar, and Crispin Freeman are the voice cast for this animated series.

DC Universe revealed more about the new season in a press release.

“Young Justice fans who couldn’t wait for season four were more than just “whelmed” at DC FanDome: Explore the Multiverse on Saturday, September 12, by not only the show’s panel with the cast and producers, but also a special table read of a brand-new Young Justice episode performed by the series voice cast – and the reveal of the title to the new season.

During the Young Justice panel, executive producers Greg Weisman and Brandon Vietti exclusively confirmed the official title for the highly anticipated fourth season as Young Justice: Phantoms. Prior to this announcement, select members of the voice cast – including Jason Spisak, Khary Payton, Stephanie Lemelin, Nolan North, Denise Boutte, Danica McKellar and Crispin Freeman – teamed up for a virtual table read of a special original episode titled Young Justice: FanDome. Season 3.9. Episode 1. “The Prize.” Written by Weisman, the script provided an early glimpse into the new season by setting up events that eventually play out further in Young Justice: Phantoms.”

Check out a replay of the panel.

What do you think? Are you a fan of the Young Justice animated series? Are you excited for the fourth season on DC Universe?