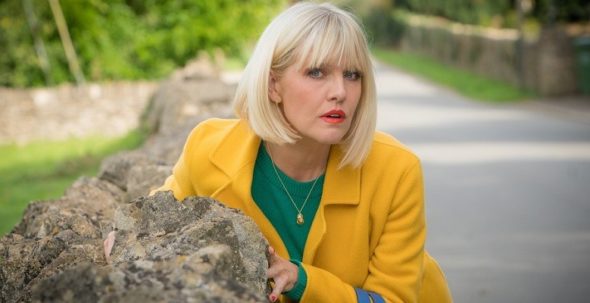 Agatha Raisin is returning for a fourth season. The comedy-mystery series has been renewed by the Acorn TV streaming service and the new season is set to kick off production next month. Ashley Jensen stars in this TV series, which is based on the novels by M.C. Beaton.

Acorn TV revealed more about the renewal of Agatha Raisin in a press release.

“The leading streaming service for television from Britain and beyond, AMC Networks’ Acorn TV is renewing one of its most popular mystery series, AGATHA RAISIN, for a fourth series with three feature-length episodes and a winter special. For Series 4, Free@Last TV’s Barry Ryan and David Walton will continue to produce the series for Acorn TV with Catherine Mackin from Acorn Media Enterprises (AME), the UK-based development division for Acorn TV, and Michele Buck from Company Pictures (an all3media company) as executive producers; and produced in association with all3media international. The series will be co-produced by Charles Palmer and Mick Panteleo and Ian Strachan returns as line producer. Acorn Media International will distribute in most English-speaking territories and international distributor all3media international will distribute in the rest of the world, including the U.K. and Australia.

Starring Emmy(R)-nominated actress Ashley Jensen (Catastrophe, Extras, Ugly Betty) and based on M.C. Beaton’s best-selling novels, the comic mystery series follows the former high-powered London PR guru, who retired early to a small, picturesque village in the Cotswolds and found a second calling as a sassy private investigator. She often resorts to unorthodox and amusing methods to help solve crimes in her deceptively devious village.

Series 4 will start production in March. Like Series 3, Series 4 will adapt four novels and will be available as eight by 45-minute episodes or four by 90-minute television movies. The novels to be adapted are Agatha Raisin: Kissing Christmas Goodbye, Agatha Raisin: Love, Lies & Liquor, Agatha Raisin & the Spoonful of Poison, and Agatha Raisin: There Goes the Bride. The Acorn TV Original series will debut the new episodes in late 2021/early 2022.

Star Ashley Jensen said, “I am overjoyed to be returning as Agatha Raisin. A role I love playing and a show that is very close to my heart. I am excited to see what’s in store for Agatha and her merry band of misfits in Series 4.”‘

Catherine Mackin, Managing Director, Acorn Media Enterprises, said, “Acorn TV is thrilled to return to the beautiful Cotswolds with our Agatha Raisin family, including our wonderful ensemble cast led by Ashley Jensen and our partners at Free@Last TV, Company Pictures and all3media. With the incredible source material of M. C. Beaton’s highly enjoyable novels, Agatha Raisin continues to be one of the most fun mystery series available and the most requested by our subscribers, so we’re excited to produce several new episodes.”

Barry Ryan, Executive Producer and Creative Director of Free@Last TV noted, “It’s impossible to say how proud we are of our Agatha Raisin family and grateful that our show is going to a fourth series on Acorn TV. Agatha Raisin has plenty more stories to tell. We know that we are lucky to be able to tell them. Its particularly poignant as we remember the creator M.C. Beaton and know that she would be overjoyed as well’.

What do you think? Are you a fan of the Agatha Raisin series on Acorn TV? Do you plan to watch season four?

Live Agatha and the whole crew. It’s wonderful. I hope there will lots more to come.

Love Agatha raisin series. Plots are
Entertaining. Cast of characters is great. Acting is effortless and believable. I have read most of the books and the transition to screen has been without a hiccup. Combination of comedy and drama balanced well. Dialogue is superb, edgy and naughty. I have all seasons on dvd and I have watched them over and over. I wish I was more eloquent to express my sincere praise of this Agatha Raisin and the whole ensemble and may it continue for a long time.

I’m so glad it’s coming back, I love the series and all the characters.

I love Agatha Raison! I can’t wait for season 4

I love Agatha Raisin!! I have watched the first 3 seasons twice; I am SO glad she’s coming back with all the fun characters!

I am very pleased that there is a fourth season. Looking forward to future seasons. Great great great

Love the comic antics as well as the poignant moments in this series. Kudos on its renewal!

I am delighted to hear this. I love the books- and the show perfectly captures the spirit of the books. I can’t wait!

Yes love it ! And now we are living in the Cotswolds ! Even better wonderful cast . Trixie

Yes, I am a fan. I love Agatha Raisin! It’s a lovely show♥

Can’t wait for the new season. I love everyone of series 1 – 3.
the whole cast is great. Please hurry!!

Agatha and her merry band are a delight to watch.