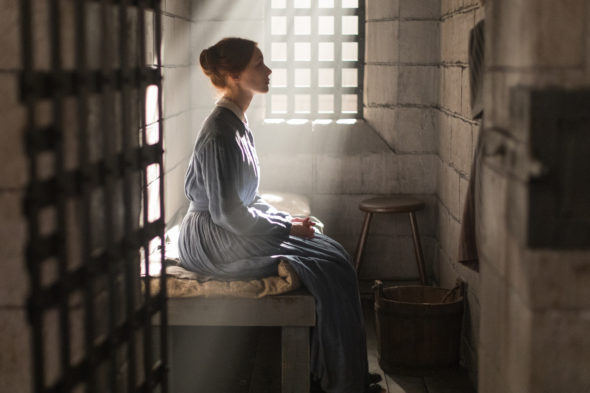 TV show description:
A Sarah Polley adaptation of Margaret Atwood’s novel which was inspired by real-life events, the Alias Grace TV show centers on a poor, young Irish immigrant from Ulster — Grace Marks. Grace works as a domestic servant in Upper Canada. After her employer and his housekeeper are brutally murdered, Grace and a stablehand are accused of the crime.

As a younger girl, Grace works at the Parkinson’s house, which is where she first meets Jeremiah (Levi). She finds the good-looking peddler charming, and he offers her guidance which seems downright prescient.

Grace’s latest employer is Thomas Kinnear (Gross). This wealthy farmer is having an affair with Nancy Montgomery (Paquin), the housekeeper who initially hires Grace. Although at first, they have a friendly relationship, Nancy eventually grows jealous of the new maid and resents the attention Kinnear pays her.

Meanwhile, James McDermott (Logan) is Kinnear’s stablehand. Hot-blooded and quick to anger, he finds Nancy’s authority over him off-putting.

In 1843, at the tender age of 16, Grace is tried for the double murder, along with Kinnear. The trial, and Marks’ fate, become a cause célèbre for warring political factions of the day.

While the Tories are certain of her guilt, 19th Century Reformers believe Grace Marks deserves an acquittal. To that end, they commission Dr. Simon Jordan (Holcroft) to come to Kingston Ontario, and examine her. They hope this reputable American’s findings will lead to her pardon.

As an object of fascination, the enigmatic Grace garners much support from notable men of her day. Whether she is a shrewd schemer or a blameless scapegoat, is in the eyes of the beholder.

What do you think? Do you like the Alias Grace TV series? Should this TV show have ended or been renewed for a second season somehow?

Alias Grace was a 6 hour mini series. It is never having new episodes

Absolutely 5 stars. ..PLEASE DO NOT CANCEL!

YES please do renew!! LOVED this!!

Brilliantly done. So much more could be done with this show. Fascinating. Well written and directed. It must go on to the next season.

Yes! Netflix Has done it again… I love this show… Would love to see more…