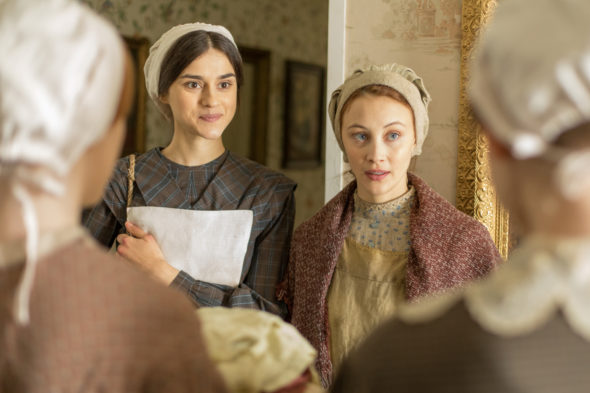 Is Grace Marks’ fate carved in stone? Has the Alias Grace TV show been cancelled or renewed for a second season on Netflix? The television vulture is watching all the latest TV cancellation and renewal news, so this page is the place to track the status of Alias Grace, season two. Bookmark it, or subscribe for the latest updates. Remember, the television vulture is watching your shows. Are you?

A Canadian series streaming on the Netflix paid subscription platform, Alias Grace stars Sarah Gadon, Edward Holcroft, Anna Paquin, Paul Gross, Rebecca Liddiard, Kerr Logan, Zachary Levi, and David Cronenberg. A Sarah Polley adaptation of Margaret Atwood’s novel which was inspired by real-life events, the historical drama centers on a poor, young Irish immigrant from Ulster — Grace Marks. Grace works as a domestic servant in Upper Canada. After her employer, Thomas Kinnear (Gross) and his housekeeper Nancy Montgomery (Paquin), are brutally murdered, Grace and stablehand James McDermott (Logan) are accused of the crime. While both are convicted, where McDermott is hanged, Grace becomes a cause célèbre for warring political factions of the day.

A co-production of Canada’s CBC and Netflix, Alias Grace is billed as a mini-series, which should mean it will end after its six-episode first season. However, The Handmaid’s Tale, which was also based on a Margaret Atwood novel, was such a hit that Hulu decided to renew it for a second season, anyhow. Because of that, I’ve decided to run out for some poutine and bide my time on Alias Grace. Flying blind, I think Alias Grace will end after one season, as originally intended. Still, I’ll keep an eye on the trades and update this page with breaking developments. Unless Netflix decides to release statistics, however, I won’t have viewership numbers to go on. Subscribe for free updates on any Alias Grace cancellation or renewal news.

What do you think? Should Netflix cancel or renew its Alias Grace TV show for a second season? Is it better as a mini-series, or does the story deserve further exploration?

This was the best show I have seen on Netflix. The end of the first season left me wanting it to go on. Please have a second season.

Please, do a second year with a conclusion!

Please renew for another season?! This series was one of my favorites and I felt the ending was definitely left open for a 2nd!!

i already have seen this serie for 3 times but it is still soo good! my life would be so much better if there would come a new season!

Great show, I truly enjoyed watching every bit of it. Now I need Season 2……please tell me it’s in the making.

Would love to see another season of this well written, well casted, well acted show. There is certainly a lot more material to be uncovered and extended!

omgggggggggg 🙁 i really loved the show. i hope they change their mind, and renew for a second season.

Please renew, she needs to reunite with Dr Jordan and help him thru his injury and reawaken his love for her

Season 2 should expand Grace’s journey and the potential to reunite her with Dr. Jordan

Plz let there be a season 2

Loved it! Really hope they do a second season.

I would realy be glad to see more coming in the near future . Alias is a really attractive story and i give my thumbs up with p.just .

I can see Alias Grace having a second season. The relationship she developed with Dr. Jordan could be built upon, especially since he returned from the war in a bad state of mind. He was her savior with psychotherapy. Now is Grace’s opportunity to return the favor to Dr. Jordan. All the elements are there for a powerful sequel.

I can see that she could get even with Jamie also. She could even jump on a boat to America and start a new life. She could even marry Jeremiah even though the man she would marry could be still Jamie. She has a fondness of Jeremiah we’re she didn’t of Jamie. Dr. Jordan could be the J also, but we don’t know if she was naive still or if she played him. There are still many many open ended ways she could live out her days. She could have even thought of being the fortune teller as Jeremiah had… Read more »