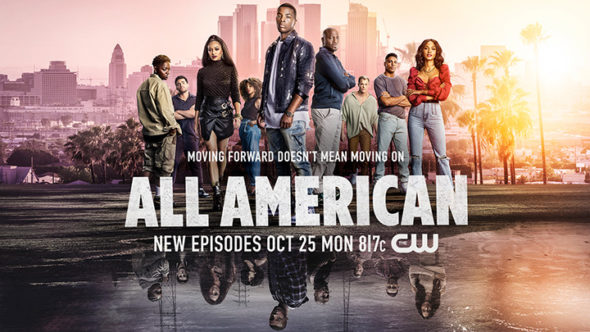 Last season, the All American series was one of The CW’s highest-rated shows and it was also one of only two scripted shows on the network that saw its traditional numbers grow year-to-year. Despite that, with this being Spencer’s final year in high school, could it also be the end of the show? Will All American be cancelled or renewed for season five? Stay tuned. *Status Update Below.

A sports drama series, the All American TV show stars Daniel Ezra, Taye Diggs, Samantha Logan, Bre-Z, Greta Onieogou, Monet Mazur, Michael Evans Behling, Cody Christian, Karimah Westbrook, Jalyn Hall, Chelsea Tavares, and JJ Parker. Inspired by the life of NFL player Spencer Paysinger, the story centers on Spencer James (Ezra), a rising high school football player and an A student who leaves Compton’s South Crenshaw High for Beverly Hills High after he’s recruited by football coach Billy Baker (Diggs). His family life, personal relationships, and athletic future all changed and grew in ways he never imagined. Spencer makes the tough decision to return to South Crenshaw High for his senior year with Baker as the team’s new head coach. Together, their plan is to bring home a football championship to save the school. In season four, with South Crenshaw High saved and the controversial State Championship behind him, Spencer has his eyes set on the All American game and his future with the NFL, which starts with Toledo State. But before our Beverly and South Crenshaw students can set their sights on college, they’ll have to navigate the tumultuous last half of senior year, including an epic unexpected prom, two graduations, and all the complications that come with the growing pains of leaving high school behind and catapulting into adulthood.

5/24 update: You can see the latest night’s ratings in context.

What do you think? Do you like the All American TV series on The CW? Should it be cancelled or renewed for a fifth season?

I’m half way through season four and it has become very boring. Let it end it’s ran it’s course!

Cancel it.. looks like they are grasping for material to write about.. boring

No wonder ratings dropped after that dreadful prom episode…

Love this show!! It should be renewed for as long as the actors want to play these characters!!