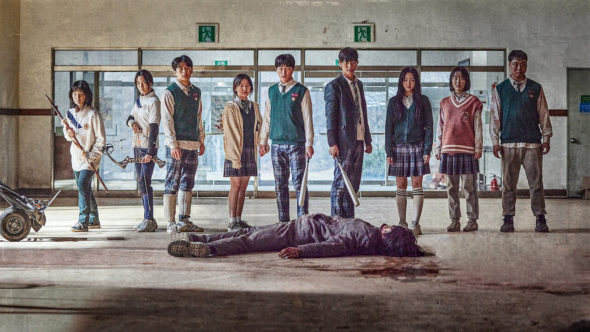 All of Us Are Dead is coming to Netflix next month. The streaming service has announced a premiere date and has released a preview for the upcoming zombie invasion series. Starring Park Ji-hu, Yoon Chan-young, Cho Yi-hyun, Lomon, Yoo In-soo, Lee You-Mi, and Lim Jae-hyeok, the series arrives on January 28th.

“Netflix Series All of Us Are Dead is an upcoming original series that follows a group of students trapped in a high school who find themselves in dire situations as they seek to be rescued from a zombie invasion of their school.

A teaser poster and date announcement trailer capturing the intense suspense was released, signaling yet another K-zombie syndrome.

All of Us Are Dead is based on a popular webtoon by creator Joo Dong-geun, touted as a ‘Korean-style zombie graphic novel’ with its wild imagination, gripping story line, and meticulous details. Ever since the news was out that Netflix was adapting it into a series, the project has become highly anticipated. Director Lee JQ who touched off multiple crazes following the TV series Beethoven Virus, The Legendary Police Woman, and the recent hit film Intimate Strangers. And Writer Chun Sung-il known for his unlimited range across various genres with TV series LUCA: The Beginning, The Slave Hunters, and film series The Pirates partnered up to capture a group of teenagers’ desperate struggle for survival in just another ordinary school. The cast of young, talented actors including Park Ji-hu, Yoon Chan-young, Cho Yi-hyun, Lomon, Yoo In-soo, Lee You-Mi and Lim Jae-hyeok bring a youthful vibe, adding color to the show.

The eye-catching teaser poster features a school swept by horror and chaos. The blood-stained schoolyard, building engulfed in flames, and countless students trapped in the frenzied school intrigue the audience, providing a whiff of the wacky story taking place in a school that gives rise to a mysterious zombie virus.

The date announcement trailer gives a striking glimpse of the intense battle between students-turned-zombies and survivors desperate to escape. It opens with a student in the school lab, inviting the audience to find out more about the virus that creates total chaos. The horrific visuals of students infected by the mysterious zombie virus and stunning action set in different parts of the school are also a must-watch. Trapped in a virus-ridden school with no cellphones, no food, and nobody to take care of them, the students reach for desk lamps, bookshelves, and bows to defend themselves from zombies In a desperate fight for survival. All of Us Are Dead will open up a completely new chapter in the history of zombies with a story of daring teenagers who manage to find love and friendship even amidst a zombie apocalypse.

All of Us Are Dead, which marks the first-ever Korean teenage zombie survival challenge, is set to be released on January 28, only on Netflix.”

Check out the preview for All of Us Are Dead below.

What do you think? Are you planning to check out this new zombie series next month?

A show about Zombies. Ground Breaking. Will someone with some originality please apply for a job at a tv network/production company please, pretty please. This tired old s**t is just tired and not at all interesting anymore. No more zombies, reality tv trash people, games shows, cooking shows, medical shows or police shows.

This is why broadcast TV is dying. Streaming and premium channels are more experimental, and out of every 5 shows they try, one or two will keep going. It’s worth the gamble to be different. Korean content is hot right now, and they’re still obsessed with zombies and demons. I rather liked their other stuff, like Squid Game, Extracurricular and My Name. Netflix has been in the game too long, and is taking safe routes with a few exceptions, like The Witcher and the new Vikings: Valhalla. We get one last season of The Last Kingdom, which is a great… Read more »

there is nothing experimental about endless reboots, a dozen of zombie/police/medical shows