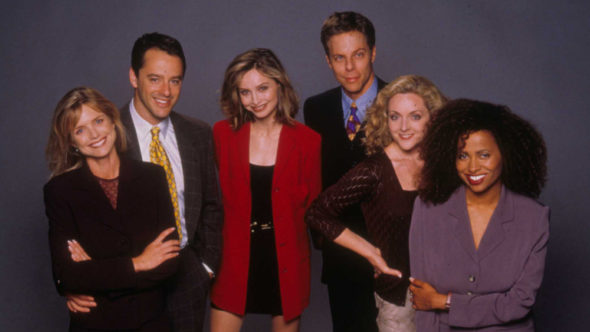 Could TV fans soon see the return of the dancing baby? A revival of Ally McBeal is currently being considered by 20th Television. Series creator David E. Kelley would produce the revival, and Calista Flockhart has been approached to return for the series, per Deadline. She appeared as the titular character for all five seasons of the FOX series which aired between 1997 and 2002.

The legal comedy-drama follows the life of Ally McBeal (Flockhart), an eccentric attorney in Boston, who goes to work at the law firm where her childhood sweetheart currently works with his wife. The series revolves around the cases and lives of McBeal and her co-workers which are often eccentric, humorous, and dramatic.

Talks about a revival are still in the early stages.

What do you think? Did you watch Ally McBeal when it aired on FOX? Do you want the series to return to the small screen?

I would be thrilled beyond belief! It was one of my all-time favorite shows and anything David E. Kelley does is fine with me. All his shows were wonderful. I hope this becomes a reality.

I would like it very much if Ally McNeal returned I watched it every week. I still listen to the the music from the show once in awhile.

Sorry to say I didn’t watch it when it came out! But I just got thru watching the end on Hulu! A loved it so much that I would watch 5 more seasons! I would love it that they would move the law firm to move to New York or at least some of them to go!! And I would love for her and Larry to find each other and get married bc ally deserves that!

I’d give it a chance if they did a reboot with the original cast. If they don’t do it now, it will probably show up on CW eventually, and just like all the other “reboot” shows on that network, it would have little or no resemblance to the show you remember.

Yes I watched all 5 seasons. Bring back Courtney, Gil, Lisa Nicole & Peter for the old guard. Ideally getting Calista to reprise Ally as the new owner of the firm would be great. Then fill in up & comers for the young folk. I would love any of the others who have gone on to greener pastures to return also if they could be persuaded.

Bringing back Ally McBeal would be so great! The characters in this series are hilarious and so fun to watch. I do hope this series is rebooted.

Just found this show in reruns. Love it!
Would like to see how they all aged, at least for a reunion movie

Reruns not available in my area but I have all five years of the show on DVD discs. Love it!

I loved the show. I hated seeing it go.

That would be GREAT!