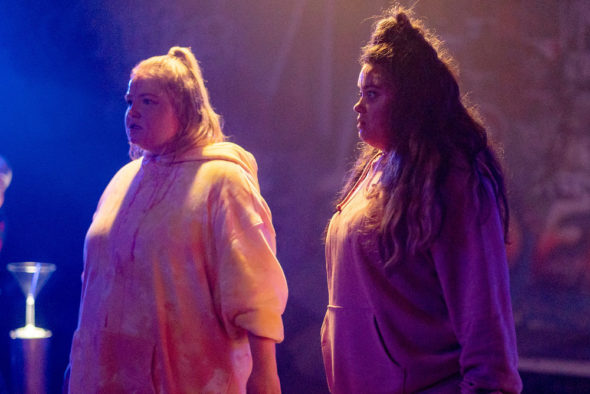 A Syfy supernatural comedy series, the Astrid & Lilly Save the World TV show stars Jana Morrison and Samantha Aucoin with Olivier Renaud, Julia Doyle, Geri Hall, Noah Perchard, Spencer Macpherson, Christina Orjalo, Kolton Stewart, Megan Hutchings, and Michael McCreary. The story revolves around a pair of BFF teens who attend Pine Academy. Lilly (Aucoin) is sweet-natured and intuitive with a passion for investigative photography. Meanwhile, Astrid (Morrison) is bold and unfiltered with a knack for “sciencey” gadgets. High school is hard enough when you’re different, but when these outcasts accidentally crack open a portal to a terrifyingly quirky monster dimension, it gets a lot more complicated. With some help from an extra-dimensional monster hunter named Brutus (Renaud), it’s up to Astrid and Lilly to vanquish the creepy creatures and save the world, becoming the badass heroes they were meant to be. That is, if they can survive the horrors of high school.

Love Astrid and Lilly Save the World!! Never missed an episode. they were all great, had action, suspense, romance, laughs, real issues, along with the “monster” part of it! We need more like this. Really hoping there is a second season!!!

Fun show. The two leads have great chemistry. It is what I would call Lite entertainment, but sometimes that’s exactly what you need. And it’s not blatantly stupid. A real plus. I want a second season. And more!

I AGREE AND POKING FUN AT THE LADIES SIZE IS NOT AND I REPEATE NOT FUNNY AT ALL SO THROUGH THE WEIGHTT JOKES OR ANY OTHER PERSONAL HURTFUL TALKING IN THE TRASH CAN WHERE THEY ALL BELONG BECAUSE EVERYONE HAS FEELINGS EVEN THOUGH THEY WERE PAID TO BE MADE FUN OF !!!!!!!!!!!!!!!

Personally I didnt care for it. Stupid premise and so so acting. Not even close to resident alien in funny and acting.