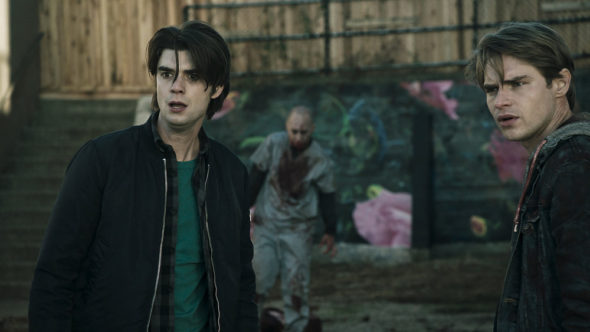 Will all six survive the first season of the Day of the Dead TV show on Syfy? As we all know, the Nielsen ratings typically play a big role in determining whether a TV show like Day of the Dead is cancelled or renewed for season two. Unfortunately, most of us do not live in Nielsen households. Because many viewers feel frustrated when their viewing habits and opinions aren’t considered, we invite you to rate all of the first season episodes of Day of the Dead here.

A Syfy horror drama series, the Day of the Dead TV show is based on the film of the same name by George A. Romero. It stars Keenan Tracey, Daniel Doheny, Natalie Malaika, Morgan Holmstrom, and Kristy Dawn Dinsmore. Recurring performers include Miranda Frigon, Mike Dopud, Dejan Loyola, Marci T. House, Kevin O’Grady, Matty Finochio, Trezzo Mahoro, Christopher Russell, and Lucia Walters. The series tells the intense story of six strangers as they try to survive the first 24 hours of an undead invasion. The tale seeks to remind us that sometimes all it takes to bring people together is a horde of hungry zombies trying to rip them apart.

What do you think? Which season one episodes of the Day of the Dead TV series do you rate as wonderful, terrible, or somewhere between? Do you think that Day of the Dead should be cancelled or renewed for a second season on Syfy? Don’t forget to vote, and share your thoughts, below.

I enjoyed the first season a lot. My only caveat would be in the finale, they skimped on the special effects that show all the zombies from town going into the mine shaft; it should’ve been a massive amount, and it would’ve looked impression, but I do understand what was going on. Just would’ve loved a huge crowd going into the mine shaft. I bought Season one, and I’m hoping for a second season.

I like this show. It captures the flavor of Romero’s work and mostly avoids The Walking Dead’s lead. If it can continue to find creative new ways to use the zombies it could be a fun way to spend many Friday nights to come.

I hope and pray that SyFy keeps Day of the Dead around and authorizes a second season. I am really getting into this show – especially now that The Walking Dead is finished. (And yes, I like this show even though the Zombies can run and climb, which we all know they can’t……) Please renew it !!