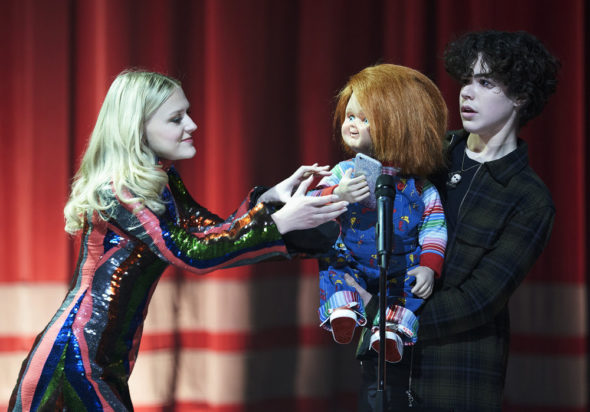 Will this town survive the first season of the Chucky TV show on Syfy and USA Network? As we all know, the Nielsen ratings typically play a big role in determining whether a TV show like Chucky is cancelled or renewed for season two. Unfortunately, most of us do not live in Nielsen households. Because many viewers feel frustrated when their viewing habits and opinions aren’t considered, we invite you to rate all of the first season episodes of Chucky here. *Status Update Below.

A Syfy and USA Network dark comedy and horror series, the Chucky TV show is based on the Child’s Play film franchise. The show stars Brad Dourif, Zackary Arthur, Teo Briones, Alyvia Alyn Lind, Björgvin Arnarson, Fiona Dourif, Alex Vincent, and Christine Elise McCarthy with Jennifer Tilly, Devon Sawa, Lexa Doig, and Barbara Alyn Woods recurring. In the story, an idyllic American town is thrown into chaos after a vintage “Good Guy” doll turns up at a suburban yard sale and is purchased by teen Jake Wheeler (Arthur). It turns out to be none other than Chucky (voice of Brad Dourif), a doll that holds the soul of a deceased and vicious serial killer. Soon, everyone in the town must grapple with a series of horrifying murders that begin to expose the town’s deep hypocrisies and hidden secrets. Meanwhile, friends and foes from Chucky’s past creep back into his world and threaten to expose the truth behind his mysterious origins as a seemingly ordinary child who somehow became this notorious monster.

What do you think? Which season one episodes of the Chucky TV series do you rate as wonderful, terrible, or somewhere between? Do you think that Chucky should be cancelled or renewed for a second season on Syfy and USA Network? Don’t forget to vote, and share your thoughts, below.

love the series watched original movies when I was a kid. Need more seasons..

Are you people serious…. . there’s nothing but violence and hate no.. less killing of children. Can we please stop with this brutally showing that attracts Young people. WTF Is wrong with you folks. Chucky is nothing more than rating for the corporate rich . Stop helping their bank account.

Well there’s your 2 cents worth, glad thats all it’s worth, glad also your in the minority! I bet u just can’t stand the gay twist either!

This show is awesome! We need a 2nd season!

It’s better on USA network though!