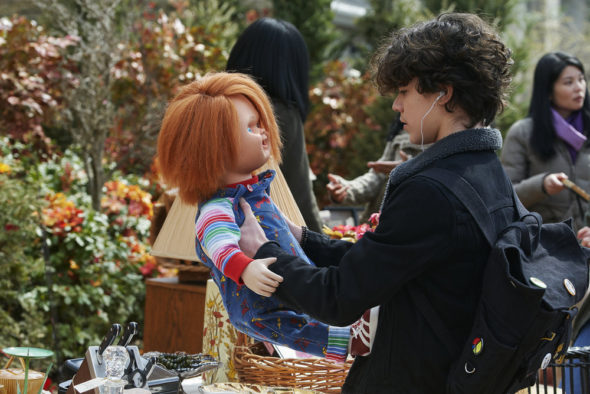 TV show description:
A dark comedy and horror series, the Chucky TV show is based on the Child’s Play film franchise and was adapted by creator Don Mancini.

In the story, an idyllic American town is thrown into chaos after a vintage “Good Guy” doll turns up at a suburban yard sale and is purchased by teen Jake Wheeler (Arthur). It turns out to be none other than Chucky (voice of Dourif), a doll that holds the soul of a deceased and vicious serial killer.

Soon, everyone in the town must grapple with a series of horrifying murders that begin to expose the town’s deep hypocrisies and hidden secrets. Meanwhile, friends and foes from Chucky’s past creep back into his world and threaten to expose the truth behind his mysterious origins as a seemingly ordinary child who somehow became this notorious monster.

What do you think? Do you like the Chucky TV show? Do you think it should be cancelled or renewed for another season?