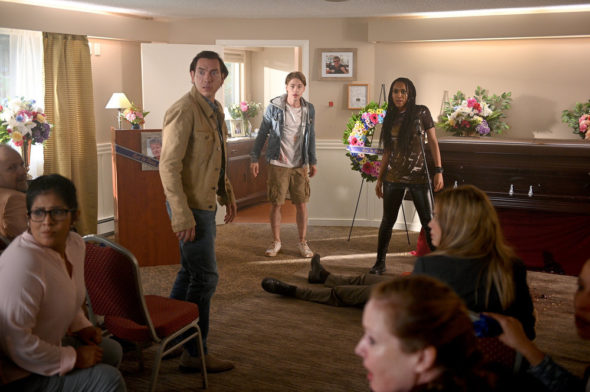 Will this show live to see another day? Has the Day of the Dead TV show been cancelled or renewed for a second season on Syfy? The television vulture is watching all the latest cancellation and renewal news, so this page is the place to track the status of Day of the Dead, season two. Bookmark it, or subscribe for the latest updates. Remember, the television vulture is watching your shows. Are you?

Airing on the Syfy cable channel, the Day of the Dead TV show is based on the film of the same name by George A. Romero. It stars Keenan Tracey, Daniel Doheny, Natalie Malaika, Morgan Holmstrom, and Kristy Dawn Dinsmore. Recurring performers include Miranda Frigon, Mike Dopud, Dejan Loyola, Marci T. House, Kevin O’Grady, Matty Finochio, Trezzo Mahoro, Christopher Russell, and Lucia Walters. The series tells the intense story of six strangers as they try to survive the first 24 hours of an undead invasion. The tale seeks to remind us that sometimes all it takes to bring people together is a horde of hungry zombies trying to rip them apart.

The first season of Day of the Dead averages a 0.06 rating in the 18-49 demographic and 219,000 viewers in the live+same day ratings (including DVR playback through 3:00 AM). While these numbers don’t include further delayed or streaming viewing, they are a very good indicator of how a show is performing, especially when compared to others on the same channel. There can be other economic factors involved in a show’s fate, but typically the higher-rated series are renewed and the lower-rated ones are cancelled. Find out how Day of the Dead stacks up against other Syfy TV shows.

Will Syfy cancel or renew Day of the Dead for season two? Based on the premise of the series, it would seem like this show is designed to run just one season. The ratings have bounced around a lot thus far so I think we’ll have to see how the rest of the season shakes out. I’ll update this page with breaking developments. Subscribe for free alerts on Day of the Dead cancellation or renewal news.

What do you think? Do you hope that the Day of the Dead TV show will be renewed for a second season? How would you feel if Syfy cancelled this TV series, instead?

The dialogue and general writing on the series is horrendous and although it isn’t as offensively woke as many shows it’s still pretty bad.