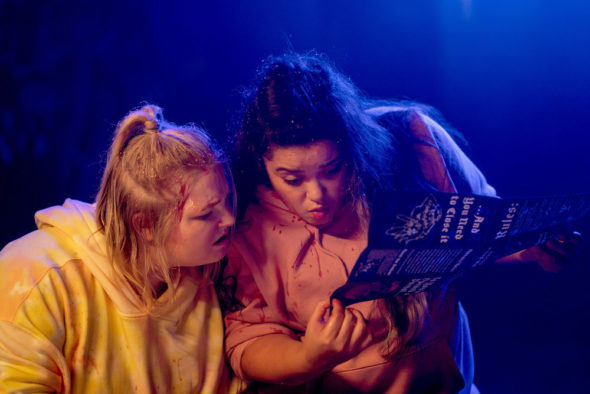 Are these BFFs up to the task? Has the Astrid & Lilly Save the World TV show been cancelled or renewed for a second season on Syfy? The television vulture is watching all the latest cancellation and renewal news, so this page is the place to track the status of Astrid & Lilly Save the World, season two. Bookmark it, or subscribe for the latest updates. Remember, the television vulture is watching your shows. Are you?

Airing on the Syfy cable channel, the Astrid & Lilly Save the World TV show stars Jana Morrison and Samantha Aucoin with Olivier Renaud, Julia Doyle, Geri Hall, Noah Perchard, Spencer Macpherson, Christina Orjalo, Kolton Stewart, Megan Hutchings, and Michael McCreary. The story revolves around a pair of BFF teens who attend Pine Academy. Lilly (Aucoin) is sweet-natured and intuitive with a passion for investigative photography. Meanwhile, Astrid (Morrison) is bold and unfiltered with a knack for “sciencey” gadgets. High school is hard enough when you’re different, but when these outcasts accidentally crack open a portal to a terrifyingly quirky monster dimension, it gets a lot more complicated. With some help from an extra-dimensional monster hunter named Brutus (Renaud), it’s up to Astrid and Lilly to vanquish the creepy creatures and save the world, becoming the badass heroes they were meant to be. That is, if they can survive the horrors of high school.

The first season of Astrid & Lilly Save the World averaged a 0.04 rating in the 18-49 demographic and 240,000 viewers in the live+same day ratings (including DVR playback through 3:00 AM). While these numbers don’t include further delayed or streaming viewing, they are a very good indicator of how a show is performing, especially when compared to others on the same channel. There can be other economic factors involved in a show’s fate, but typically the higher-rated series are renewed and the lower-rated ones are cancelled. Find out how Astrid & Lilly Save the World stacks up against other Syfy TV shows.

Will Syfy cancel or renew Astrid & Lilly Save the World for season two? The reviews have been positive and the channel has paired this show with its top show, Resident Alien. The ratings are okay so, I think this show still has a good chance of being renewed. I’ll update this page with breaking developments. Subscribe for free alerts on Astrid & Lilly Save the World cancellation or renewal news.

What do you think? Do you hope that the Astrid & Lilly Save the World TV show will be renewed for a second season? How would you feel if Syfy cancelled this TV series, instead?

I really hope it gets renewed. It’s such an off-beat endearing show. I need to see what happens next.

I really want a second season of astrid and lilly save the world. It can’t end the way it did with episode 10.

I really enjoy this show! It’s the only show i actually look forward to watching every week. I think this show could really do more in the second season if given the chance!

We want a second season of Astrid and Lilly .

We love Astrid and Lilly and want a second season!!