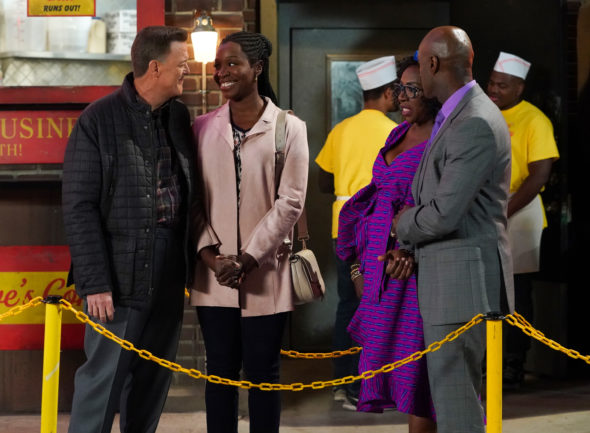 The course of true love may not get smoother in the fourth season of the Bob ♥ Abishola TV show on CBS. As we all know, the Nielsen ratings typically play a big role in determining whether a TV show like Bob ♥ Abishola is cancelled or renewed for season five. Unfortunately, most of us do not live in Nielsen households. Because many viewers feel frustrated when their viewing habits and opinions aren’t considered, we invite you to rate all of the fourth season episodes of Bob ♥ Abishola here.

A CBS romantic comedy series, Bob ♥ Abishola (read as “Bob Hearts Abishola”) stars Billy Gardell, Folake Olowofoyeku, Christine Ebersole, Matt Jones, Maribeth Monroe, Vernee Watson, Shola Adewusi, Barry Shabaka Henley, Travis Wolfe Jr, Gina Yashere, Bayo Akinfemi, Anthony Okungbowa, and Saidah Arrika Ekulona. As the story begins, Bob (Gardell) is the owner of a very successful compression sock factory in Detroit and runs the business with his mother (Ebersole), his sister (Monroe), and his younger brother (Jones). The stress of the job lands Bob in the hospital with a heart attack and he falls in love with his cardiac nurse, Abishola (Olowofoyeku), an immigrant from Nigeria. She came to America with her young son (Wolf Jr.) and they live with her Auntie Olu (Adewusi) and Uncle Tunde (Henley). Despite their very different backgrounds and her initial lack of interest, Bob is determined to win Abishola’s heart. He eventually does but life has a way of getting complicated.

What do you think? Which season four episodes of the Bob ♥ Abishola TV series do you rate as wonderful, terrible, or somewhere between? Do you think that Bob ♥ Abishola should be cancelled or renewed for a fifth season on CBS? Don’t forget to vote, and share your thoughts, below.

Please reconsider your account number ratings so funny I can’t wait to see it every Monday night comedy night. Never missed any episode of it.

Please reconsider in boost your account of your ratings so funny every Monday night enjoy it and love it every week.