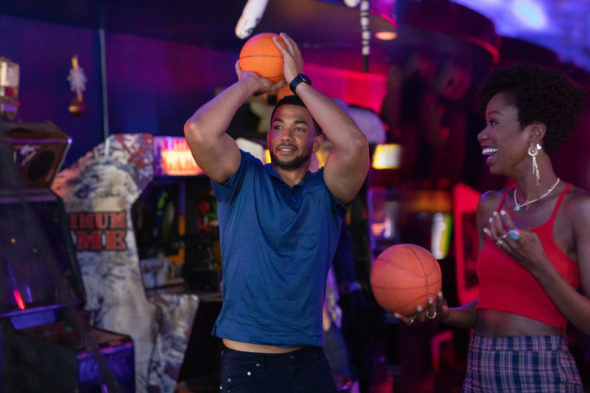 Are viewers in love with the first season of the Cherish the Day TV show on OWN? As we all know, the Nielsen ratings typically play a big role in determining whether a TV show like Cherish the Day is cancelled or renewed for season two. Unfortunately, most of us do not live in Nielsen households. Because many viewers feel frustration when their viewing habits and opinions aren’t considered, we invite you to rate all of the first season episodes of Cherish the Day here.  *Status Update Below.

An OWN romantic drama anthology, Cherish the Day is created and produced by Ava DuVernay. The show revolves around a different couple each season and each episode spans a single day. The first season stars Xosha Roquemore, Alano Miller, and Cicely Tyson, with Michael Beach, Anne-Marie Johnson, and Kellee Stewart in recurring roles. Gently James (Roquemore), a well-traveled caregiver from the West Adams district, and software engineer Evan Fisher (Miller) have a chance meeting and fall in love in Los Angeles.

What do you think? Which season one episodes of the Cherish the Day TV series do you rate as wonderful, terrible, or somewhere between? Do you think that Cherish the Day should be cancelled or renewed for a second season on OWN? Don’t forget to vote, and share your thoughts, below.

Why doesn’t OWN show full episodes of Cherish the Day?

I love this show. I cried when they broke up. I want them back together!! They are 2 awesome people. She is so elegant and beautiful and he is the man most women want!! The last episode was Awesome. I don’t know what is going to happen next but you know that they definitely still Love each Other.
I can’t wait for the next show!!

Love this show. It is well written and the characters are relatable.

Please have a Season 2 this was the Best show all year. I miss it already.

This is the Best romantic show to reveal true love in the black community. It brought back memories from my past. I thought it was me and my ex true Love

I love this show, it’s a must stay on the air always. The cast are so inspire with love and compassion, especially Evans’s love for Gently and Cicely, I gather love, wisdom, hope , inspiration and so from this show…..was prepared to watch 3/31/20 and was so dishearten that it did not come home. People need to see this peaceful show, with all going on with the COVID-19 going on.

So true and well stated!

I absolutely LOVE this show and I sincerely hope it is renewed for another season!

This show is refreshing and so beautiful, clean. I wish it would come back on.

I loved this show. this show made me think of how much my grandparents loved each other until the day they died

There is no other show on television that came remotely close to this one. It’s just different. I loved everything about this show and I think all of us became emotionally involved in this show. Gently’s friend, Rika, said it best. “We still believe in love. Evan and Gently gave us that hope”