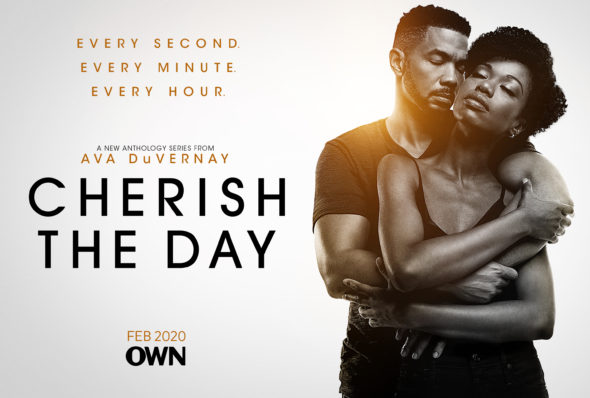 It seems like OWN has been cleaning house lately as the channel has cancelled a few of its scripted series. Does that mean that OWN will give new shows more time to establish themselves? Will Cherish the Day be cancelled or renewed for season two? Stay tuned. *Status Update Below.

Created and produced by Ava DuVernay, Cherish the Day is a romantic drama anthology TV series. It revolves around a different couple each season and each episode spans a single day. The first season stars Xosha Roquemore, Alano Miller, and Cicely Tyson, with Michael Beach, Anne-Marie Johnson, and Kellee Stewart in recurring roles. Gently James (Roquemore), a well-traveled caregiver from the West Adams district, and software engineer Evan Fisher (Miller) have a chance meeting and fall in love in Los Angeles.

What do you think? Do you like the Cherish the Day TV series on OWN? Should it be cancelled or renewed for a second season?

I love cherish the day. I recorded all the episodes and have re watched them twice. Please bring it back for another season

I loved this series. Truly down to earth. It should be renewed. Great story line

Please RENEW..love the show and love the love in the show. So engaging it has you rooting for the characters continued love.

I LOVE THIS SHOW! BRING IT BACK

Cherish the day should be renewed and not cancelled.

Love the show one of the best on T.V. right now. Feel im love with the fitst episode. Praying for season 2

This is one of our date night shows, Please renew Cherish The Day. We do miss it. When is it coming back on????????

Please renew Cherish the Day, love this show and hope it can continue with the same characters

I think Cherish The Day is a great show, i records it and watch the same show a few times before i delete it and can’t wait til the next show. I hope it gets RENEWED

Cherish the day is a great scripted show. I pray there is a season 2

Why start a great show and not renew?????

I enjoyed watching the comical romantic drama and look forward to watching a season 2. I can hardly wait to see how the storyline further develops.

I love this show, I watched part of an episode and taped the series because I am usually too busy to watch on Tuesday nights, I am so glad I did. Love the characters, loved the story line. Please don’t cancel. Wished there could be another storyline with these same characters. Excellent acting.