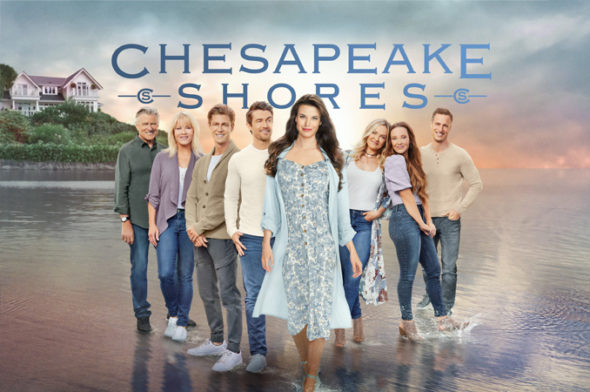 We don’t have to wonder if Chesapeake Shores will be cancelled this time around since it’s already been announced that season six is the end. Could strong ratings lead to this Hallmark Channel show being revived for a seventh season someday? Stay tuned.

A Canadian-American family drama, the Chesapeake Shores TV series stars Robert Buckley, Meghan Ory, Treat Williams, Laci J. Mailey, Emilie Ullerup, Brendan Penny, and Andrew Francis. The store explores the lives of the O’Brien family, after the homecoming of eldest daughter Abby O’Brien (Ory), a high-powered career woman and divorced mother of two. In season six, the O’Brien family comes together in the aftermath of Connor’s (Francis) heart attack. Jess (Maily) and David (Carlo Marks) start to deal with the media fallout after Dennis Peck (Malcolm Stewart) goes on the run, and lean on one another for support. Abby finally reveals to her family who she called at the end of season five and this leads to an unexpected yet exciting first date. Meanwhile, Mandrake (Wesley Salter) and Kevin (Penny) talk about their difficult past.

For comparisons: Season five of Chesapeake Shores on Hallmark Channel averaged a 0.10 rating in the 18-49 demographic and 1.46 million viewers.

What do you think? Do you like the Chesapeake Shores TV series on Hallmark Channel? Should it have been renewed for a seventh season?

Renew with Trace and Abby getting back together, as it was meant to be. Season 5 and 6 had horrible writing. No flow, slow and boring. Bring Trace back.

One of my fav shows! PLEASE RENEW!

Love the show. Shouldn’t be ending