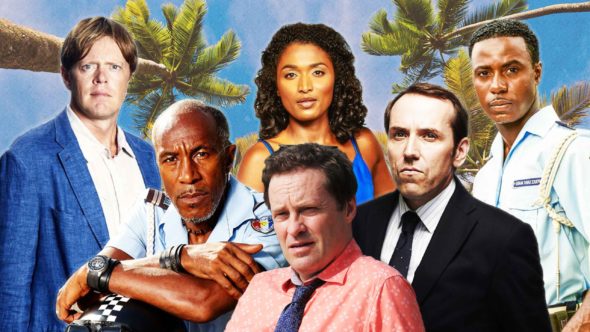 Death in Paradise returned for its ninth season on BBC One last night, and fans of the series were treated to some big news ahead of the premiere. The series has been renewed for two more cycles — seasons 11 and 12 — on the UK television channel.

Here in the United States, the Ovation channel recently aired the first six seasons of Death in Paradise, between October and December of last year.  It’s unclear if Ovation will continue airing the series.

Ben Miller, Sara Martins, Danny John-Jules, Gary Carr, Don Warrington, and Élizabeth Bourgine star in the TV series which follows Richard Poole (Miller), a UK detective who takes over as the man in charge of the police on a Caribbean island after going there to investigate a murder.

BBC One revealed more about the renewal of Death in Paradise in a press release.

“The much-loved hit, set on the French Caribbean island of Guadeloupe, is celebrating its tenth anniversary this January – with the season premiere airing today. The feat is made all the more remarkable as series 10 was filmed entirely through the pandemic, with production delayed by three months and accelerated to ensure viewers could enjoy the new series in its usual January slot.

Marking its milestone second decade in production, series 11 and 12 will see cast regulars and new faces alike descend on Saint Marie, delving into a world of mysterious murders and perplexing puzzles that have gained Death In Paradise its reputation as a shining example of the crime drama genre.

Far from resting on the laurels that a decade on screen has earned, the next two series will keep viewers on their toes, says Executive Producer Tim Key: “We are hugely proud of series ten and delighted we’ll be heading back to Saint Marie to continue the story. Our amazing cast and crew have delivered against the odds this year and we can’t wait to get going again – we’ve got huge plans for the future, with lots of surprises to come.”

Belinda Campbell, Joint Managing Director of Red Planet Pictures, says: “We’re delighted that Death In Paradise has been recommissioned for two more series. It’s testament to the talent of the cast and production team and the loyalty of our amazing audience that after 10 series we remain one of the UK’s favourite TV dramas.”

Death In Paradise is licensed to over 230 territories and has proved incredibly successful across the world, often proving the best performing drama on its respective channel in each region. In the UK, Death In Paradise continues to be phenomenally popular, with series nine averaging over eight million viewers and each episode being the most watched programme of the day.

BBC Commissioning Editor Tommy Bulfin says: “We’re really proud of Death In Paradise and know how popular it is with viewers, offering some much needed escapism as well as compelling whodunnits and deeply satisfying plot twists. We hope audiences enjoy the tenth anniversary series starting tonight, and they have lots to look forward to with series 11 and 12.”

Death In Paradise is a Red Planet Pictures production for BBC One made with the support of the region of Guadeloupe and internationally distributed by BBC Studios.”

What do you think? Are you excited to see more of Death in Paradise on BBC One? Would like to see additional seasons on Ovation?

This series is amazingly engaging, full of surprises & twists & the acting is cohesive, demonstrates charisma between characters, and is never boring or mundane. We’re spreading the word here in California/USA. Please continue this much beloved series….it’s looked forward to with great eagerness each week…….Thanks and aloha

One of the best shows I’ve seen in years. I’m hooked on it. I’ve recently discovered TV shows in the UK have much better writers AND actors than the U.S. and this Death in Paradise is no exception. U.S. writers and producers should get their heads out of the sand. Just sayin….

Canadian mystery, detective shows are a lot better than the American shows. Script writers in the US should take notice. I am hooked on this show.

Looking forward to new episodes of Death in Paradise. Have been waiting for a while of one of the most diverse whodunit shows in a while. It was long overdue — Welcome back to the entire cast!!!

Please Ovation! Continue to carry the new seasons of Death in Paradise. It is one of our favorite shows!!!

My husband and I have watched every episode, some twice…we are in Colorado and enjoy the escape to a tropical island, as well as the mysteries and especially the cast members!! We are so happy to see that it will be back for 2 additional seasons!!!

love this series . has anyone thought about a spinoff using the non dead actors in new detective stories that are situated in places the inspectors live now?