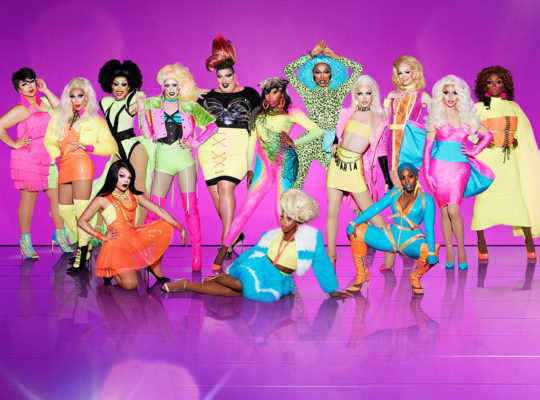 RuPaul’s continues his reign on VH1. The cable channel has renewed RuPaul’s Drag Race, RuPaul’s All Stars Drag Race, and the Untucked series.

VH1 has not yet announced premiere dates for the new seasons of RuPaul’s Drag Race, RuPaul’s All Stars Drag Race, or Untucked.

Here’s the press release about the renewals:

NEW YORK, NY – August 20, 2020 – On the heels of the highest-rated season in franchise history and 13 Emmy(R) Award nominations, VH1 today announced that “RuPaul’s Drag Race” has been greenlit for a new season. In the upcoming 13th season, the juggernaut series will welcome a new batch of drag queens ready to prove why they’re “America’s Next Drag Superstar.”

Additionally, “RuPaul’s Drag Race All Stars” will debut its sixth season with some of the franchise’s most notable queens returning to compete for a highly coveted spot in the “Drag Race” hall of fame.

“Untucked,” the Emmy(R) nominated aftershow that gives viewers an all-access pass to the competition including behind-the-scenes drama, unseen moments and plenty of shade, also has been greenlit to follow both “RuPaul’s Drag Race” season 13 and “RuPaul’s Drag Race All Stars” season six.

“Drag queens have been on the frontlines of many challenging times in our history,” said four-time Emmy(R) Award-winning Host and Executive Producer RuPaul. “RuPaul’s Drag Race 13, All Stars 6 and new seasons of Untucked will offer more opportunities for our queens to rise to the occasion and spread the love.”

The groundbreaking season 12 of “RuPaul’s Drag Race” saw fans gathering remotely to enjoy the series, earning VH1 its highest-rated Friday night in 12 years. The top three queens competed in the first-ever virtual finale where each created a dramatic stage, sickening look and dazzling performance from their homes, culminating in a jaw-dropping final lip sync that earned Jaida Essence Hall the crown.

In the fifth season of “RuPaul’s Drag Race All Stars,” viewers watched the drama unfold with all new rules and lip sync assassins as Shea Couleé won a spot in the “Drag Race” hall of fame. “All Stars” was up +9% from the previous season and ranked as the #1 series in its time period with P18-34 and W18-34.

About VH1:
VH1 is the dominant pop culture brand for adults 18-49. The network is available in 86 million U.S. households and has an array of digital channels and services including the VH1 App, VH1.com and @VH1. VH1 is a unit of Viacom Inc. (NASDAQ: VIA, VIAB). For more information, please visit www.vh1press.com, VH1.com, or the VH1 Facebook page. Follow us on Twitter @VH1Comms.

About World of Wonder:
For more than two decades, award-winning production company World of Wonder has introduced audiences to new worlds, talent and ideas that have shaped culture. Programming highlights include: Emmy(R) Award winning “RuPaul’s Drag Race” (VH1/Logo), “Million Dollar Listing” LA & NY (Bravo), “Dancing Queen” (Netflix), “Big Freedia: Queen of Bounce” (Fuse), and “Gender Revolution: A Journey with Katie Couric” (National Geographic); award-winning films and documentaries including “Mapplethorpe: Look at the Pictures,” “Menendez: Blood Brothers,” “Inside Deep Throat,” “The Eyes of Tammy Faye,” “I Am Britney Jean,” “In Vogue: The Editor’s Eye,” “Carrie Fisher’s Wishful Drinking,” “Monica in Black and White,” Emmy-winning “The Last Beekeeper,” and Emmy-winning “Out of Iraq.” Seven of WOW’s films have premiered at the Sundance Film festival including “Becoming Chaz” and “Party Monster.” World of Wonder has also created a substantial digital footprint with its YouTube channel WOWPresents (1M+ subs), SVOD digital platform WOW Presents Plus, along with an award-winning blog, The WOW Report. World of Wonder’s bi-annual RuPaul’s DragCon is the world’s largest drag culture convention, welcoming 100,000 attendees across LA and NYC in 2018. Co-founders Randy Barbato and Fenton Bailey authored The World According to Wonder, celebrating decades of production, which can be found online at http://worldofwonder.net/. Randy and Fenton were honored with the IDA Pioneer Award in December 2014, celebrating exceptional achievement, leadership, and vision in the nonfiction and documentary community, named to Variety’s Reality Leaders List in 2017, and chosen for the OUT100 list in 2018 for their trailblazing work in the LGBTQ+ community. World of Wonder was also selected for Realscreen’s 2018 Global 100 list, which recognizes the top international non-fiction and unscripted production companies working in the industry today. World of Wonder creates out of a historic building/gallery space in the heart of Hollywood.

What do you think? Are you a fan of RuPaul’s Drag Race? Are you excited for new seasons?

YES! Love these shows so much!