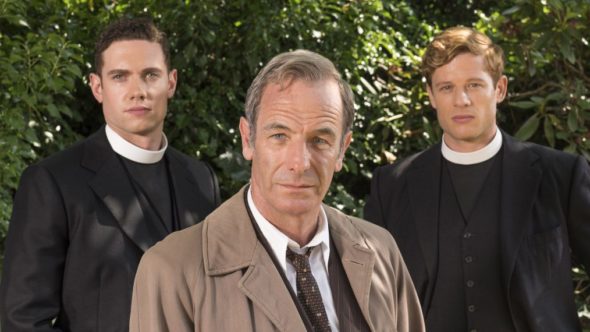 Grantchester will be back! Deadline reports the ITV show has been renewed for a fifth season.

The UK drama, which airs on PBS in the U.S., is set in 1950s England and centers on a detective who teams up with an Anglican vicar to solve crimes. The cast includes  James Norton, Robson Green, Morven Christie, Tessa Peake-Jones, Al Weaver, and Kacey Ainsworth.

Season four of Grantchester is slated to debut on PBS on July 14th at 9 p.m. ET/PT. Notably, this will be James Norton’s last season. You can read more about the season five renewal from Deadline below:

Season 5 will pick up in Cambridge in 1957, a year after the current fourth season in which Prime Minister Harold MacMillan told the British people that they had “never had it so good.” For many of the residents of Grantchester, it really will feel like they’re in a delightful new Eden, but for all the talk of paradise on earth and faith-in-action, Geordie (Green) knows that trouble is never far away.”

What do you think? Do you watch Grantchester? Will you watch season five?

Grantchester season IV was painful to watch as the sxcripts seemed written in 2019 for the 1956 era. James Norton was wise to leave the series after the mess they put him into. The civil rights jargon was anachonistic. The openess of Leonard’s partnership was inappropriate for the era. Geordi’e wife’s sexual harrassment was post the Me II 2018 dialogue. It was a mess to try to follow. It was far inferior to previous episodes. I hope that season V finds better writers for the good actors they have. The quality of most PBS series lies with excellent writers. I… Read more »

The first show was a bit messy, but we are definitely looking forward to seeing how it progresses without James Norton. Cute as he is, Sidney did get on my nerves with his weaknesses sometimes.

I did not watch Grantchester snd will not be watching future episodes. In my opinion, James Norton was the only reason to watch the series and with his departure, there is no reason to watch. Also, with so few episodes and the length of time between seasons, like all PBS series, it does not hold much interest. I’ve found the books the series is based on and am reading them.

The first episode back was so awful, I’m suppose to believe that he falls in love at first sight, and can’t wait to be in racial fights in America. I’ve also grown tired of Sidney having a life crisis every Season just quit the priesthood already. It just was a really poorly done send off for his character.
Then you got the new Vicar, and what he is a Sherlock also? Should’ve just brought over Father Brown oh wait he isn’t a hunk.

I’m going to miss James Norton, but I love the other characters and the writing is supurb. Grantchester is my favorite show!

Hate seeing James Norton. I will keep watching to see how things progress with new Vicar.

Absolutely though will miss James terribly.

I am absolutely thrilled. I’m a huge fan of the show.

Yes to season 5 and beyond. Am looking forward to Sunday. Sorry, Fear the Walking Dead I have you set to DVR later in the night.

Love this program both the characters and the storylines. Hate to see James Norton go, but I think I’m going to like the new vicar. He’s easy on the eyes!

I hate to see James Norton leaving but Yes

I enjoy the excellent acting and complicated stories which showcase how difficult leading a straight and narrow life can be, no matter how hard one tries.