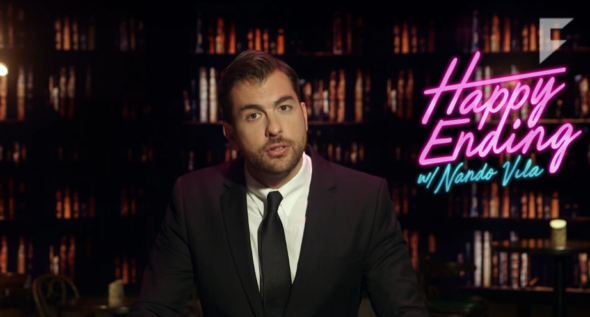 “In America, we believe in this thing called capitalism.” Fusion has announced their new TV show Happy Ending with Nando Vila will premiere on February 8th.

The sketch comedy show “takes a step back and tries to figure out what’s going on behind the headlines, spotlighting the absurdity of the world in silly and absurd ways.”

FEBRUARY 1, 2018 — FUSION today announced it will premiere a new political sketch comedy series, “Happy Ending with Nando Vila,” on Thursday, February 8 at 9PM. The ten-part explainer series takes a step back and tries to figure out what’s going on behind the headlines, spotlighting the absurdity of the world in silly and absurd ways.

“America is looking for a happy ending to the mess we are in,” said Vila. “We are taking a fun, entertaining and informative look at the different building blocks of our political system, while proposing solutions in the hopes of making progress—because we’d like to end up, you know, happy.”

In the premiere episode “Killed by Capital,” Nando sets out on a film noir detective hunt to figure out what capitalism is, and how it controls our lives. Future episodes will tackle the gig economy, health care, housing, imperialism, and more.

Nando Vila has produced, hosted, and contributed to a range of programs for FUSION since the network’s launch. During the 2016 election cycle, he executive produced the Emmy-nominated documentary “The Naked Truth: Trumpland,” which profiled the people who fueled the Trump candidacy. He has served as a contributor to “The Feed” and “AMERICA with Jorge Ramos” as well as the network’s coverage of the 2014 midterms and 2016 presidential elections. In 2014, he produced and co-hosted FUSION’s “Midterm Mayhem,” alongside Kal Penn–an unprecedented live political coverage show for the network. Additionally, Nando produced and co-hosted “The Soccer Gods,” a weekly show for soccer fanatics, for two years including special coverage of the 2014 World Cup.

“Happy Ending with Nando Vila” is executive produced by Nando Vila along with Chris Kasick (“Uncle Nick” and “Attack of the Show”).”

What do you think? Are you a fan of sketch comedy? Will you watch Happy Ending with Nando Vila?