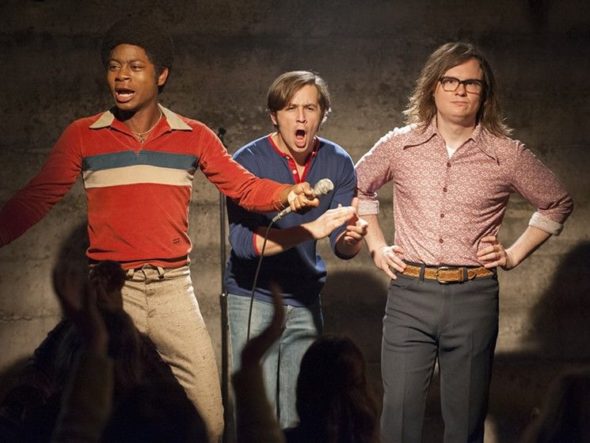 The laughter has ended. Showtime has cancelled the I’m Dying Up Here TV show so there won’t be a third season. The dramedy series ran for two seasons and 20 total episodes.

Despite the low ratings, I’m Dying Up Here was renewed for a second season and those episodes kicked off in May 2018. The demo was consistent with a 0.04 rating and viewership was up by 24%, averaging 178,000 viewers.

Though viewership improved, it was still very low and so, it’s no surprise that Showtime opted to pull the plug. The cable channel remains in business with two of the show’s executive producers, Jim Carrey and Michael Aguilar. They both executive produce Showtime’s Kidding series, which also stars Carrey.

What do you think? Did you like the I’m Dying Up Here TV show? Are you sorry that there won’t be a third season? Should this show have been cancelled?

I love that show. Very sad that it wont be back. I dont watch a lot of series, only this and The Deuce. Maybe another channel will pick it up?

I LOVED the show, both seasons were well written and brilliantly acted. I will miss it very much.

So much of television today is bull-this show was really one of the best things on!! I’m just about done with Showtime!!

Loved the show. Really progressive and above the normal fare being offered today. Inquiring minds want to know. Meanwhile Kidding with Carrey basically sucks and is self -serving not really that funny. 2 shows in and we’re done.

So sad to see this show gone. Such depth. Great atmosphere. Will be missed

Yes I am going to use caps = BIG MISTAKE. HUGE. Civilization is crumbling and this was one of the ONLY shows that was intelligently, honestly, brilliantly crafted– it was a light in the darkness. That Showtime has now extinguished. UGH. What an idiotic decision this was, to cancel it. Kidding is embarrassingly terrible. So disappointed in this decision. Please be smart and reconsider. The acting, writing, subject, production… were some of the best I have ever witnessed in episodic content. Please bring it back or else I am cancelling Showtime.

Very disappointed that this show is cancelled. My husband and I loved.the.show.

Thought that this show was Great!
Brad Garret acted his ass off – wouldn’t be surprised if he was nominated for an Emmy next year.
Very sorry that it was canceled & really thought it needed Beter lead in

why get rid of a great show with great actors and great writing????? I felt like I was getting an inside look on how all the comic greats got started… this is a very disappointing decision

Showtime traded “I’m Dying Up Here” for “Kidding”?? Are you kidding us?! IDUH was quite possibly the closest thing to authentic reality on television as it gets. Melissa Leo should skip the Emmys and just get an Oscar. Showtime can officially go **** Itself! Except for maybe Billions and Ray Donovan.

This is such a crappy choice. This is one of the best shows to ever be done. It wasn’t even given a real chance when run at the time it did against a huge popular show. The show is perfection of writing, acting and production. There wasn’t a bad story line, or a bad bit of acting. This is a huge mistake and I am so sorry to see Showtime give up on it. I was waiting with all the hope I could possibly have to see it win a third season. It is not only a show about the… Read more »

SHAME ON YOU SHOWTIME!! IDUH WAS THE BEST SHOW IN YEARS – ALL OF US STAND-UP COMICS + BOOMERS WERE AWAITING SEASON THREE LIKE A KID AT CHRISTMAS. THE HISTORICAL ROOTS OF STAND-UP COMEDY ..ON TJE LEGENDARY SUNSET STRIP=IRREPLACEABLE!
PERHAPS IF YOU DIDN’T RUN IT OPPOSITE “GAME OF THRONES”, MELISSA LEO, HER STAND-IN, AND THE REST OF THE CAST + CREW, COULD HAVE HAD A 3RD SEASON…AND WE COULD HAVE BEEN TRULY ENTERTAINED – A RARITY IN TODAY’S REALITY PROGRAMMING. MILLENIALS DON’T KNOW WHAT THEY WERE MISSING!

I wholeheartedly agree. AND – what a HORRIBLE way to end it !! We were HUGH fans – and will miss it TERRIBLY !!

Cia UK
I adored this fantastic show. The insight into the mind of a comedian warts and all was fascinating.
And i’m not convinced about the poor viewing figures.
This show must return – don’t them grind you down.