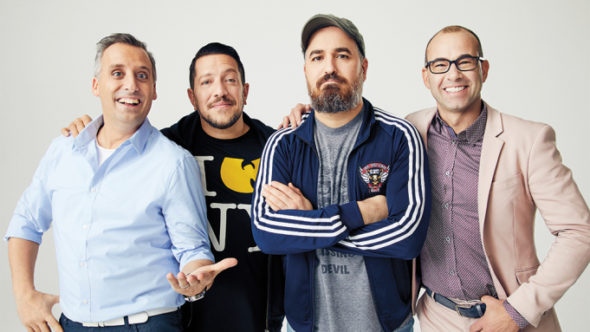 The six-episode series will see the Tenderloins virtually reunite “as they sit down to break bread from their respective homes. Fans will see the guys like never before, by drawing back the curtain for an up close and personal glimpse at their lives while they practice social distancing.”

Impractical Jokers: Dinner Party premieres on truTV on May 21st at 10 p.m. ET/PT.

LOS ANGELES – May 13, 2020 – truTV is continuing to build on the hugely popular franchise Impractical Jokers with a greenlight of Impractical Jokers: Dinner Party. The six-episode half-hour series is set to premiere on Thursday, May 21 at 10:00p.m. ET/PT. Starring Joe Gatto, James “Murr” Murray, Brian “Q” Quinn, and Sal Vulcano, collectively known as the comedy troupe The Tenderloins, the self-filmed show virtually reunites the long-time friends, forced apart for the first time in over 25 years, as they sit down to break bread from their respective homes. Fans will see the guys like never before, by drawing back the curtain for an up close and personal glimpse at their lives while they practice social distancing.

“The Impractical Jokers franchise continues to defy all expectations and we have the opportunity to deliver some much needed levity for fans right now” said Brett Weitz, General Manager of TBS, TNT, and truTV. “This new iteration comes at the perfect time for families looking for content to watch together at home.”

Be a guest at a Dinner Party with the stars of Impractical Jokers every Thursday night! Join the guys as they dish about their week, their friendship and whatever else is thrown on their dinner table. Just because they can’t be together, doesn’t mean they have to stop laughing.

“While all of us are social distancing, we wanted to find a fun way to lighten spirits and bring some laughter from our homes directly to our fans’ living rooms,” said The Tenderloins.” Although this isn’t our usual format, this new show is a unique and intimate way to entertain our fans and further our relationship with those who have come to know us across eight seasons of Impractical Jokers.”

The series comes on the heels of the network’s first-ever feature-length film Impractical Jokers: The Movie, which opened in theaters earlier this year with the highest per-screen average of all major theatrical releases in its first week. The Tenderloins are also the stars of TBS’s The Misery Index, hosted by Jameela Jamil and returning for season two on Thursday, May 14 at 10:30pm ET/PT.

What do you think? Are you a fan of Impractical Jokers? Will you watch the new series?

cant understand the “appeal” of this show, i TRIED to watch a few episodes of this, and its garbage, ther is NOTHING even mildly entertaining or funny about these jerks at all, its one of the worst things besides “reality/competition / talent / singing” shows EVER, its sad that these idjits are pseudo celebrities.