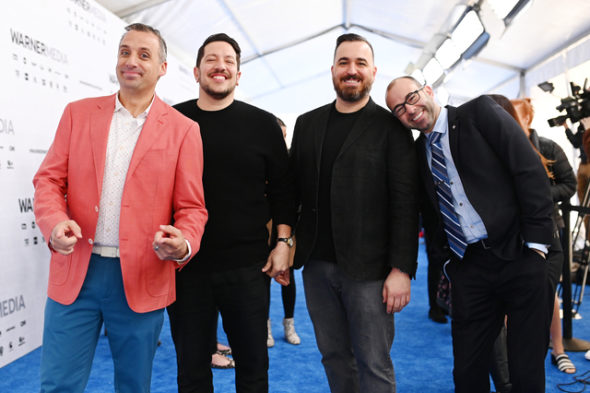 The Tenderloins, aka Joe Gatto, James “Murr” Murray, Brian “Q” Quinn, and Sal Vulcano, are staying on truTV. WarnerMedia has made a new deal with the Impractical Jokers crew which includes a first-look deal and an early 10th season renewal for the series. Season nine debuts tonight.

Here’s the deal and renewal announcement:

LOS ANGELES (February 4, 2021) – WarnerMedia announced today that the company has locked a first-look deal with the stars of truTV’s highest rated franchise, “Impractical Jokers.” As part of the agreement, Joe Gatto, James “Murr” Murray, Brian “Q” Quinn and Sal Vulcano, collectively known as the comedy troupe The Tenderloins, will develop and produce original unscripted and scripted programming for TNT, TBS and truTV as well as HBO Max. Currently ranked as cable’s #1 unscripted comedy in 2020, “Impractical Jokers” has been renewed by truTV for a tenth season ahead of its ninth season premiere on Thursday, February 4 at 10:00p.m. ET/PT.

Brett Weitz, General Manager, TBS, TNT and truTV said: “From the very first dinner I had with Joe, James, Brian and Sal, I knew I loved spending time with them, and that our audiences would as well. And here we are, greenlighting a tenth season. We’re proud to be the home, where the guys can continue to flex their creative muscles, continue to evolve their comedy and build new IP that we can introduce into the larger WarnerMedia family.”

Corie Henson, EVP/Head of Unscripted Development, TNT, TBS, truTV added: “The guys had a hit movie and three wildly successful shows with ‘Impractical Jokers,’ ‘Dinner Party’ and ‘Misery Index’… and that was all in 2020 alone. They are prolific and have a ton of ideas about how to turn more hits into an even bigger brand. We have three networks, so we’re going to get out of their way, and give them the support and the biggest platform to do just that.”

“For over a decade, truTV has been our home and we couldn’t be happier to continue crashing on the company couch,” said The Tenderloins. “We absolutely love making ‘Impractical Jokers’ and a big part of that is the support that WarnerMedia gives to us and our crazy ideas. To continue making ‘Jokers’ while being given the opportunity to develop and produce other content for our beloved fans is a dream come true. That’s not hyperbole. We’re grateful and excited to an insane degree.”

· The ninth season of truTV’s tentpole series “Impractical Jokers,” premieres on February 4th at 10:00p.m. ET/PT. The series is a ratings juggernaut that consistently achieves a top cable comedy ranking and is currently cable’s #1 unscripted comedy in 2020. This season, the guys get more personal than ever before. From colorfully redecorating one Joker’s private property to forcing another to make food deliveries in the car from hell, boundaries will be hilariously over-stepped, and personal space will be memorably invaded.

· The third season of “The Misery Index” kicks off January 26th at 10:30p.m. ET/PT on TBS. Inspired by the card game Sh*t Happens, the series features teams competing against each other my attempting to rate hilarious and miserable real-life events based on the “misery index” – a ranking system created by a team of therapists. Jameela Jamil stars as the host with Gatto, Murray, Quinn and Vulcano as recurring panelists.

· Last year, truTV’s first feature-length film “Impractical Jokers: The Movie” opened to 2.6 million across 357 theaters and expanded in its second week to nearly 1,900 theaters across the United States. The film follows the four lifelong friends and comedians in a fictional story of a humiliating high school mishap from the early nineties. Featuring appearances from Paula Abdul, Jaden Smith, and Joey Fatone, the movie combines the fictional narrative with real-life footage of over-the-top punishments and callbacks to classic moments from the series.

· Coming Soon: A new season of “Impractical Jokers: After Party” follows host Joey Fatone as he takes the cast of the “Impractical Jokers” and surprise guests through a deep dive of challenges, special play-by-play punishment analysis, and bonus content.

· The complete “Impractical Jokers” catalogue is currently available for viewers to stream on HBO Max.

What do you think? Do you like the Impractical Jokers TV series? Are you planning to watch seasons nine and 10 on truTV?