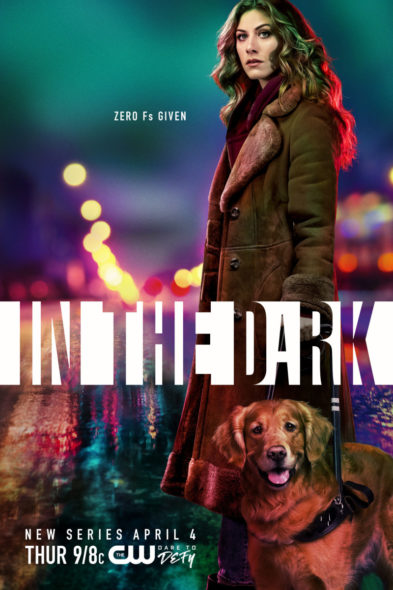 What do you make of Murphy Mason, during the first season of the In the Dark TV show on The CW? As we all know, the Nielsen ratings typically play a big role in determining whether a TV show like In the Dark is cancelled or renewed for season two. Unfortunately, most of us do not live in Nielsen households. Because many viewers feel frustration when their viewing habits and opinions aren’t considered, we’d like to offer you the chance to rate all of the In the Dark season one episodes here. *Status update below.

A CW comedy-drama, In the Dark stars Perry Mattfeld, Rich Sommer, Brooke Markham, Casey Deidrick, Keston John, Morgan Krantz, Thamela Mpumlwana, Derek Webster, and Kathleen York. The story follows a hard drinking and smoking blind woman, Murphy Mason (Mattfield). When she stumbles upon the body of a drug-dealing kid, Tyson (Mpumlwana), who once saved her from a mugger, Dean Riley (Sommer) and the other cops find her drunken account less than convincing and no body in sight. Frustrated and heart-broken, Murphy, her guide dog, Pretzel, and best friend, Jess Damon (Markham), set out to uncover the truth about Tyson’s fate. Murphy will do whatever it takes — even if that means setting down her drink.

What do you think? Which season one episodes of the In the Dark TV series do you rate as wonderful, terrible, or somewhere between? Should The CW cancel or renew In the Dark for a second season? Don’t forget to vote, and share your thoughts, below.

I just binged the entire first season in one night…and I dont do that kind of thing. Pulled mr in more than anything I’ve seen in a very long time!, great cast and love the comedy amidst the drama!

I loved season one, I watched the whole season in 2 days. I CANT WAIT until season 2. Absolutely a hit kept me very interested love the cast!!!! GREAT JOB..

Loved this show and look forward to season two and three and four…….

Love this series! Hope there is a second series

I stumbled onto this show on Netflix and fell in love with IN THE DARK. Can’t wait for season 2. When will it be released

Please I’m begging you to keep In the Dark, it is excellent, and excellent acting and storyline and directing. Plus there is nothing else like this on TV which makes it even better

My brother was a Nielson House. this was a bad thing because he never watches TV. And his wife hogs the set and only watches Real Estate shows. He had to take sole control of their bank accounts because she was always put down non refundable deposits on houses they could never afford to buy.

Love the show and the cast! Each character brings something to the table and Murphy has the greatest sense of humor – which is why I love her!! Not too crazy that she ended up with the cop. I hope Max comes back next season….Max and Murphy belong together!!

This last episode had me freaked out and worried about Murphy’s life! Just can’t believe Dean would be a bad guy? Total twist. The funniest was Felix and Jess trying to get involved!

The show is enjoyable. The characters are very likable. I can’t wait to see what happens every week!

I truly love this show! It is a smart storyline, fabulous backstory of the characters, it is made for smart people, not this ridiculous fluff you typically see on network shows. I do worry that it is to mature for the average network viewers

Enjoy the show but lead part has become less likeable as the season cont’.

She’s supposed to be less likeable and not someone we’d ever have as a friend!

I hated this show from the beginning. Didn’t get any better for me.