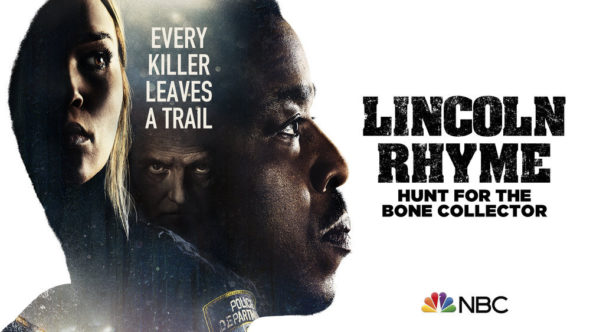 For the past couple years, NBC has been filling the Fridays at 8 PM timeslot with crime dramas like The Blacklist and Blindspot. Now, the peacock network has introduced a new one. Will Lincoln Rhyme: Hunt for the Bone Collector be successful enough in the ratings to be renewed for a second season or, will it be cancelled instead? Stay tuned. *Status update below.

A crime thriller series, Lincoln Rhyme: Hunt for the Bone Collector stars Russell Hornsby, Arielle Kebbel, Brían F. O’Byrne, Tate Ellington, Courtney Grosbeck, Ramses Jimenez, Brooke Lyons, Roslyn Ruff, and Michael Imperioli. “The Bone Collector”, an enigmatic and notorious serial killer, terrified New York City. But then, he seemingly disappeared. Now, three years later, when an elaborate murder points to his return, it brings former NYPD detective and forensic genius Lincoln Rhyme (Hornsby) out of retirement and back into the fold. Rhyme has a personal connection to the case since a trap that was set by the killer left him paralyzed. But this time, Rhyme is teaming up with Amelia Sachs (Kebbel), an intuitive young officer who’s got her own gift for profiling. The unlikely detective duo plays a deadly new game of cat and mouse with the brilliant psychopath who brought them together.

3/14 update: You can see the latest night’s ratings in context.

What do you think? Do you like the Lincoln Rhyme: Hunt for the Bone Collector TV series on NBC? Should it be cancelled or renewed for a second season?

Can’t believe yet another great series which you can get hooked on & they have cancelled it. Absolutely disgusting….why bother in the first place. You didn’t even give it a chance. Please reconsider & bring it back

please renew Lincoln Rhyme this was great tv series I really got into this please bring it back don’t get rid of stuff people like to watch.

Renew Lincoln rhyme I love it

Renew I love it

I absolutly love this show.I want a season 2 really bad!!!!!

Please renew. It is refreshingly different that other crime shows.