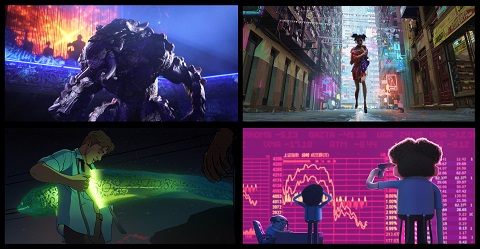 Love, Death + Robots has been renewed for a fourth season by Netflix. Each episode of the adult animated anthology series features different stories told in different animation styles by teams of artists from across the globe. Episode genres have included drama, horror, comedy, science-fiction, and fantasy, and each installment, running less than 22 minutes, is connected to the title of the show in some way.

The show launched in March 2019, and the first volume/season is comprised of 18 episodes.  Season two bowed in May 2021 with eight installments and season three launched on the streaming service in May of this year with nine episodes. There will be nine installments in season four and a premiere date will be announced later.

Netflix revealed more about the renewal of the series in a press release.

Check out the announcement about the Love, Death + Robots renewal below.

What do you think? Are you excited about the return of Love Death + Robots on Netflix?

Nice to hear. Most episodes have a high quality 3D animation style, quite like the first 3D animation movies Pixar is (in)famous for. Or the accompanying ‘shorts’ from those movies.

One of Netflix’s little gems. Or perhaps not so little. But a gem, nonetheless.