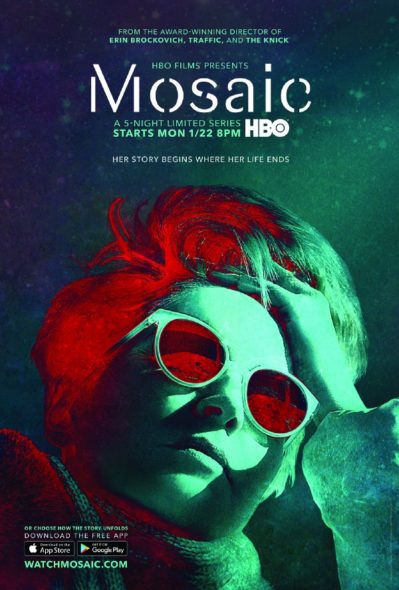 TV show description:
From director Steven Soderbergh, writer Ed Solomon, and producer Casey Silver, the Mosaic TV show is a mystery drama. It is also available via an interactive iOS/Android mobile app. While viewers cannot choose the ultimate ending to the story, using the app, they can choose from which character’s point of view to watch the story. Different information is available in each perspective.

Olivia Lake (Stone) is a popular children’s author and illustrator. One night, while attending a Summit, Utah fundraiser with her close friend JC (Reubens), fledgling graphic artist Joel Hurley (Hedlund) catches her eye. Olivia is happy when Joel accepts her offer for a place to stay and work, at least until his girlfriend, Laura (Kazan), unexpectedly shows up.

Soon thereafter, Olivia meets the charismatic Eric Neill (Weller), who is also new to town. With dollar signs in his eyes, Eric sets out to seduce her, with surprising results.

On New Year’s Day, Olivia goes missing. Since she left behind a blood-soaked studio, the police kick off an investigation into her disappearance. Now, Detective Nate Henry (Ratray) must figure out “whodunit.” Meanwhile, Eric’s sister, Petra (Ferrin), is also determined to solve the mystery.

Series Finale:
Episode #6
Determined to uncover the missing pieces of the Summit murder puzzle, Petra (Jennifer Ferrin) turns up the heat on JC (Paul Reubens), Alan (Beau Bridges) and Tom (Michael Cerveris) while probing the mining history of several interconnected Summit properties. After getting the cold shoulder from the lead prosecutor on a closed case, she finds herself treading on dangerous ground as the truth – or what she hopes is the truth – is finally revealed.
First aired: January 26, 2018.

What do you think? Do you like the Mosaic TV series? Have you used the new app? Should this TV show have been renewed for a second season on HBO?

We felt exactly the same as RRobin220. We were almost sorry we watched it because of the ending. However, if that wasn’t the ending and it is going to continue then we would definitely watch it.

I thought this was a very engaging story. However, the ending was inconclusive and I really don’t like that. I want to know how the author intended the story to conclude, and not be drawn in to decide for myself. Then, it is my story and not theirs. But I thought the acting was quite compelling and the story subtle yet powerful.