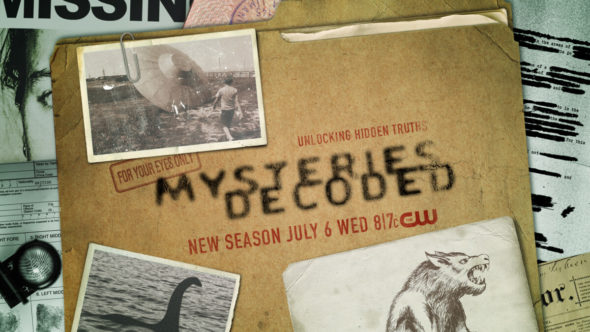 The CW cancelled most of its series from the regular 2021-22 television season. Because the network is being sold, the strategy of its owners making a profit from later sales of their programming will no longer be applicable. Will this unscripted series survive where so many scripted shows did not? Will Mysteries Decoded be cancelled or renewed for season three? Stay tuned.

An investigative documentary series, the Mysteries Decoded TV show delves deeper into some of America’s greatest unsolved mysteries, exploring newly discovered evidence and utilizing high-tech tools in reopening each case. From the Phoenix Lights to the Werewolves of Kentucky, each investigation is led by Jennifer Marshall, an accomplished U.S. Navy veteran turned private investigator, as she mobilizes a team to embark on the formidable quest to bring closure to these long-lingering historical puzzles.

8/4 update: You can see the latest night’s ratings in context.

For comparisons: Season one of Mysteries Decoded on The CW averaged a 0.13 rating in the 18-49 demographic and 582,000 viewers in the live+same day ratings.

What do you think? Do you like the Mysteries Decoded TV series on The CW? Should it be cancelled or renewed for a third season?