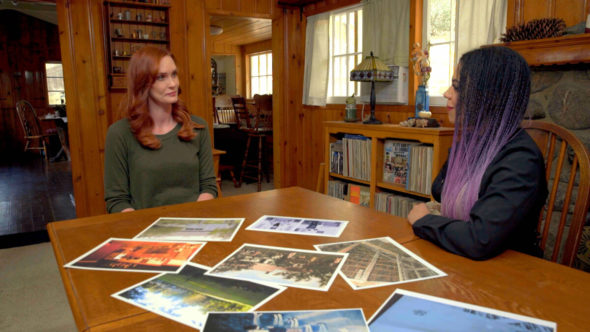 Has the Mysteries Decoded TV show been cancelled or renewed for a third season on The CW? The television vulture is watching all the latest cancellation and renewal news, so this page is the place to track the status of Mysteries Decoded, season three. Bookmark it, or subscribe for the latest updates. Remember, the television vulture is watching your shows. Are you?

Airing on The CW television network, the Mysteries Decoded TV show delves deeper into some of America’s greatest unsolved mysteries, exploring newly discovered evidence and utilizing high-tech tools in reopening each case. From the Phoenix Lights to the Werewolves of Kentucky, each investigation is led by Jennifer Marshall, an accomplished U.S. Navy veteran turned private investigator, as she mobilizes a team to embark on the formidable quest to bring closure to these long-lingering historical puzzles.

The second season of Mysteries Decoded averages a 0.04 rating in the 18-49 demographic and 495,000 viewers in the live+same day ratings (includes all DVR playback through 3:00 AM). Compared to season one, that’s down by 68% in the demo and down by 15% in viewership. While these numbers don’t include further delayed or streaming viewing, they are a very good indicator of how a show is performing, especially when compared to others on the same channel. Though other economic factors are involved, the higher-rated shows usually get renewed and the lower-rated ones get cancelled. Find out how Mysteries Decoded stacks up against other CW TV shows.

Will The CW cancel or renew Mysteries Decoded for season three? The network cancelled most of its 2021-22 shows in preparation for the upcoming sale of The CW. In that this series appears relatively inexpensive to license, it seems likely to be renewed but all bets are off once the network has a new owner. I’ll update this page with breaking developments. Subscribe for free alerts on Mysteries Decoded cancellation or renewal news.

What do you think? Do you hope that the Mysteries Decoded TV show will be renewed for a third season? How would you feel if The CW cancelled this TV series, instead?