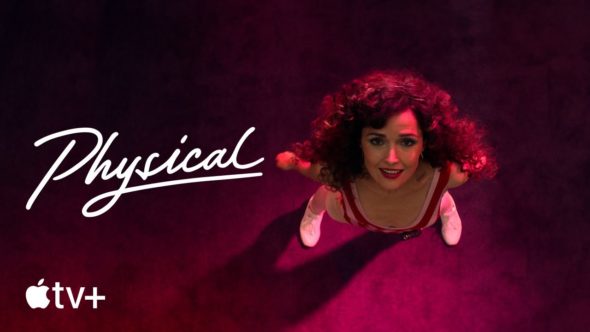 Sheila’s journey will continue. Apple TV+ has renewed the Physical TV show for a second season.

The first season of Physical debuted on June 18th and the 10-episode season wraps this Friday, August 6th. A release date for season two will be revealed at a later time.

Here are some additional details from Apple TV+:

Apple TV+ announced today that the global hit comedy “Physical,” starring Rose Byrne and created by Annie Weisman, has been picked up for a second season. The news comes ahead of this Friday’s highly anticipated season one finale, “Let’s get Together,” in which Sheila entertains an intriguing proposition while Bunny’s finances and Tyler’s health come to a head.

“We couldn’t be more proud to showcase Annie Weisman’s singular take on this darkly funny, heartbreaking and bold story,” said Michelle Lee, director of Domestic Programming, Apple TV+. “And then we got to watch Rose Byrne inhabit this incredible, multi-layered character, giving us an unforgettable tour de force performance. We have been thrilled to see audiences around the world fall in love and feel seen by this show and we can’t wait for everyone to experience the next chapter in Sheila’s journey towards personal empowerment.”

Since its global debut, “Physical” has continued to draw in audiences around the world week-to-week and has been critically hailed as “sharply observant” (Washington Post), “compelling” (Paste), “very funny” (The Guardian) and “a strikingly beautiful show about ugly things” (The Atlantic), with Byrne’s performance hailed as “magnetic,” “electrifying” (NPR) and “spellbinding” (Indiewire) as she takes on “the role of a lifetime” playing “one of the great characters of recent TV history” (Paste), “a fresh new kind of female antihero” (The Playlist).

Set in the idyllic but fragile beach paradise of sunny 1980s San Diego, “Physical” is a half-hour dark comedy following Sheila Rubin (Byrne), a quietly tortured, seemingly dutiful housewife supporting her smart but controversial husband’s bid for state assembly. But behind closed doors, Sheila has her own darkly funny take on life she rarely lets the world see. She’s also battling a complex set of personal demons relating to her self-image … that is, until she finds release through the unlikeliest source: the world of aerobics.

At first hooked on the exercise itself, Sheila’s real road to empowerment comes when she discovers a way to merge this newfound passion with the burgeoning technology of videotape to start a revolutionary business. The series tracks her epic journey from a stifled, overlooked enabler to a powerful, confident economic force, as Sheila transforms into someone we take for granted today (but was entirely radical at the time) – the female lifestyle guru.

“Physical” is produced for Apple TV+ by Tomorrow Studios (an ITV Studios partnership). Created, written and executive produced by Weisman, who also serves as showrunner, “Physical” is directed by Craig Gillespie and Stephanie Laing, who also serve as executive producers along with Marty Adelstein and Becky Clements for Tomorrow Studios, Alexandra Cunningham, John McNamara, Sera Gamble and Byrne.

Apple TV+ offers premium, compelling drama and comedy series, feature films, groundbreaking documentaries, and kids and family entertainment, and is available to watch across all your favorite screens. After its launch on November 1, 2019, Apple TV+ became the first all-original streaming service to launch around the world, and has premiered more original hits and received more award recognitions faster than any other streaming service in its debut. To date, Apple Original films, documentaries, and series have been honored with 125 wins and 503 awards nominations.

For more information, visit apple.com/tvpr and see the full list of supported devices.

*Special offer is good for three months after the first activation of the eligible device. One offer per Family Sharing group. Plans automatically renew until cancelled. Other restrictions and terms apply; visit apple.com/promo for more information.

Check out our status sheets to track new TV series pickups, renewals, and cancellations. You can find lists of cancelled shows here.
What do you think? Have you been watching the Physical TV series? Are you glad to hear that this show has been renewed for a second season?

If you like aerobics and the genre of TV show it’s awesome. I think so can’t wait to watch the whole season

I thought it was a flop…