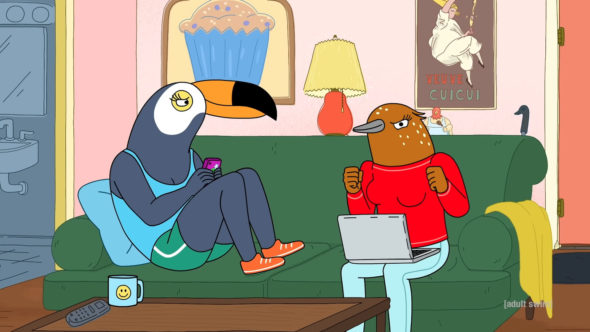 The birds of a feather are sticking together. Adult Swim has renewed the Tuca & Bertie TV show for a third season. An animated comedy starring Tiffany Haddish and Ali Wong, this series ran for one season on Netflix before being cancelled. It was later revived by Adult Swim and season two debuted in June. The second season’s finale airs on August 15th.

Everyone’s favorite BFFs are set to soar even higher as Adult Swim, the leader in adult animation and #1 destination for young adults, greenlights a third season of the animated comedy Tuca & Bertie. Adult Swim has also secured the international rights for seasons two and three, now making the show available globally via the brand. Filled with relatable scenarios and never-ending chaos, the final two episodes of Tuca & Bertie season two are set to premiere Sunday, August 8 and Sunday, August 15 at 11:30 p.m. ET/PT.

Tuca (Haddish) and Bertie (Wong) are best friends, and they’re both full of ghosts! Bertie is busy excavating her inner ghouls with the help of a therapist, while Tuca prefers to stuff hers behind the toilet. She’ll deal with them later, right now she’s just too busy trying not to be single anymore! Meanwhile, Speckle (Steven Yeun) is building a new house but soon finds he’s driven to the brink of insanity…good thing he’s just a cartoon.

Tuca & Bertie is created and executive produced by Lisa Hanawalt, with Raphael Bob-Waksberg, Noel Bright, Steven A. Cohen, Haddish, and Wong also serving as executive producers, The series is produced by Michael Eisner’s The Tornante Company with the animation being done at Shadowmachine.

Adult Swim (AdultSwim.com), launched in 2001, is WarnerMedia’s #1 brand for young adults offering original and acquired animated and live-action series. Airing nightly from 8 p.m. to 6 a.m. (ET/PT) on its linear channel, and also available through HBO Max, Adult Swim is basic cable’s #1 network with persons 18-34 and 18-49, and is seen in 94 million U.S. homes, reaching over 40 million viewers via HBO Max.

GKYAC’s mission is to be the premiere global provider of kids, family, young adults, and classics content and brands. The group’s programming supplies unique and compelling content for HBO MAX, WarnerMedia’s direct-to-consumer platform. Uniting these award-winning networks and innovative brands helps maximize opportunities and growth potential, both as standalone businesses and as content generators, to drive and support its franchises, cross-studio initiatives as well as ratings.

Warner Bros. GKYAC’s content is currently distributed in 192 countries around the world and the division’s networks are in 500 million homes, delivered through more than 65 channels in 31 languages.

Check out our status sheets to track new TV series pickups, renewals, and cancellations. You can find lists of cancelled shows here.
What do you think? Have you watched the Tuca & Bertie TV series on Netflix of Adult Swim? Are you glad to hear that it’s been renewed for a third season?

It’s a little risque sometimes but it’s cute and makes me laugh often.